'How to Turn Pulp Fiction Into Art' 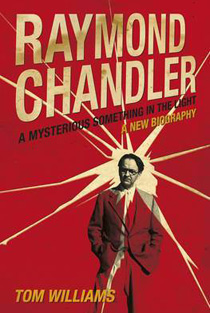 A Mysterious Something In the Light: The Life of Raymond Chandler

This unsettling biography of the lonely, proud, secretive, alcoholic and often nasty man who crafted the most poetic hard-boiled detective fiction extant, could have been subtitled “How To Turn Pulp Fiction Into Art.” Like his iconic creation, Philip Marlowe, although more overtly in the author’s case, Raymond Chandler was messed up. Born in Chicago in 1888, the child of a violent alcoholic father and a doting mother, raised in a particularly class-obsessed British home, in love with a married woman 18 years his senior (who eventually became his wife), a man whose life and writings offer considerable grounds for considering him racist, misogynist, homophobic and suppressive of his own homosexuality—as well as equally plentiful evidence to deny every one of those charges—Chandler only fell into crime writing when the Great Depression and his own drinking financially ruined him in his 40s.

About time, too. Chandler, classically educated at Dulwich College in London, P.G. Wodehouse’s alma mater, had gifts apt for his new profession. He possessed a foreigner’s ear for American demotic—late in life he recalled his amazement at hearing a black man call out to his girlfriend, “Hurry up, baby, places want us to go to them”—an amazing eye for detail, and a genre-appropriate way with similes: An aged general “used his strength as carefully as an out-of-work showgirl uses her last pair of stockings.”

Most of all, he had Los Angeles. Still a smallish city when Chandler arrived in 1913, it was dominated by oil, Pentecostalism, Hollywood and deep corruption. Chandler passed on his outsized Galahad complex to Marlowe—famously describing his PI as born for his town: “Down these mean streets a man must go who is not himself mean, who is neither tarnished nor afraid.” Neither would have been happy in an upright New England village. Both would have spent their days digging for the dirt they would be sure lay festering just under the surface. In Los Angeles no one had to look hard or long.

Every bit as much as Marlowe, L.A. is a character in Chandler’s novels, not just a backdrop, “a poisonous place,” Williams writes: “It’s not merely a home for lonely people, but actually makes them lonely.” The city promises non-stop excitement and delivers little, at least in Chandler’s eyes, and that prompts its inhabitants, especially the women—whose crimes start every Marlowe story—to go looking for trouble. Raymond Chandler was famously indifferent to plot, to the extent that he lost track of just who killed one of the characters in The Big Sleep, but no one reads him for plot anyway: his striking dialogue and tortured relationship with his adopted city are what have made his novels live on.