In Seth Klein's newly released book, A Good War: Mobilizing Canada for the Climate Emergency, he presents a comprehensive climate action plan that requires Canadians to act as if they're off to war 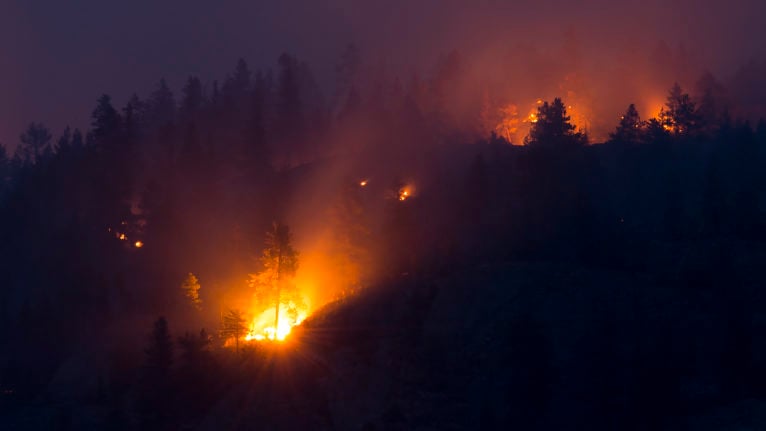 Flareups are seen from the Christie Mountain wildfire along Skaha Lake in Penticton, B.C. on August 20, 2020. (Jonathan Hayward/CP)

In August, during the COVID-19 pandemic, we recorded what looks to be earth’s highest temperature ever: 54.4 degrees Celsius. Death Valley, California was home to the stunning high, measured during a warmer-than-usual year, yet another cycle of 365 days of unpredictable weather and extreme weather events exacerbated by the human-made climate crisis. Not long after the new temperature record was set, wildfires began to ravage the west coast of the United States and Canada, fuelled by a changing climate.

In the book A Good War: Mobilizing Canada for the Climate Emergency, which was published this month, activist, author and founding British Columbia director of the Canadian Centre for Policy Alternatives Seth Klein takes on the climate crisis. While temperatures soar and wildfires burn, his message that we need to do more and need to do it now, resonates. Even in the midst of the pandemic—a different challenge, one that feels more immediate, more pressing—we cannot forget that the precious time we have to save ourselves is ticking away. While we wait, oceans are rising, extreme weather events are killing people, displacing millions and destroying property, and our food supply is at risk. These are just a few of many threats.

The central frame of Klein’s book is that the climate crisis is analogous in some ways to World War II, and we ought to mobilize accordingly, like we did in the 1930s and 1940s. The parallels are not hard to find: an initial reticence to act; a period of acceptance but non-action (the “Phoney War” phase); a common crisis to meet, sacrifice for, and overcome. Klein states his discomfort with the war analogy upfront—one shared by many, including myself. But he uses it to get at a question that correctly answered, might save us: “What can be learned from the last time we collectively mobilized and completely retooled our economy in short order?”

MORE: Those who suffer most from climate change did the least to cause it

Perhaps that seems like a lot to ask. It is and it should be. A Good War is an ambitious, necessary call to action. It’s just as interesting as a history text as it is a big-ideas book, but it’s the latter function that matters now. Like the prospect of hanging at dawn, it focuses the mind. We need that focus now more than ever, just as we need to look towards history for answers.

During World War II, the enemy was tangible. During the climate crisis, that has not always been the case. Klein has found a candidate. “The primary ‘enemy’ or force we confront at this juncture,” he writes, “is an insidious way of thinking and practice that plagues our politics and economic policy- making—a dynamic I call the new climate denialism.”

Classic climate change deniers simply say, “Nothing to see here,” or “It’s a hoax.” The new climate deniers, as Klein sees them, are those “political leaders, the fossil fuel industry, as well as leading media outlets and pundits [who] assure us that they understand and accept the scientific warnings about climate change, but then they promote and practice a politics and policy agenda that fails to align with what the scientific consensus says we must do.” Klein cites examples, including Justin Trudeau and his Liberal government’s support for extracting fossil fuels as well as the federal purchase of the Trans Mountain pipeline. He also takes aim at Premier John Horgan and his New Democratic Party government in British Columbia for its enthusiastic support of the liquefied natural gas industry.

MORE: ‘Overpopulation’ alarmism marginalizes those most vulnerable to climate change

Klein presents a comprehensive plan for mobilization that calls for an approach premised on the fact that we are not doing enough to tackle the climate crisis in time: government, industry, civil society, households and individuals must go all-in, paying more for projects to manage the climate crisis, consuming less, consuming better, and living sustainably. While he places the brunt of the action burden on government and industry, Klein understands the need to build trust, buy-in and solidarity by calling for broad participation and sacrifice, though within a just framework of equity rather than strict equality.

In the 1930s and 1940s, Canada mobilized quickly and completely. Klein argues we must do so again. That means retooling the economy as well as government while tackling inequality (which boosts emissions and undermines broad, shared capacity to act). Klein’s plan of action is comprehensive: green infrastructure, mandated over voluntary changes, strict regulations, new crown corporations, an all-of-government climate secretariat, mass production and distribution of climate-friendly technologies, meaningful reconciliation with Indigenous Peoples, rapid phasing out of fossil-fuel vehicles, mass retrofitting of homes and businesses, ending fossil fuel extraction in the coming two or three decades, and more. If that seems like a lot, it is. It’s an agenda for an emergency. The alternative is suffering, institutional breakdown and death.

Midway through the book we meet an unlikely hero for a writer like Klein: C.D. Howe. During World War II, Howe was Prime Minister Mackenzie King’s minister of munitions and supply. Klein writes of a “delicious irony” in his “newfound appreciation for C.D. Howe” with whom Klein would share precious little by way of political philosophy. But during the war, Howe got the job done by doing whatever it took, even dismissing cost concerns, saying, “If we lose the war nothing will matter.”

But how do we pay? Well, start with Howe’s quotation above. We pay however we must. For most of our history human life has been a struggle against scarcity. Now it is a struggle for the distribution of abundance. Yet that abundance and its distribution are guiding us towards disaster. We need to flip the equation.

Klein argues for a multi-pronged approach of new taxes, Green Victory Bonds (akin to wartime Victory Bonds), and other measures. He also argues that we should all be paying more (save for the lowest earners). This point is critical. The left has abandoned the idea of broad-based income tax increases that include the “middle class”—that ill-defined lot that governments love to pander to by way of charming rhetoric. They should retake that ground. We should all pay more. Our lives depend on it.

We should know better than to destroy ourselves. That’s as simple in theory as it has been elusive in practice. History is littered with accounts of rise and fall. In an episode that historian Susan Wise Bauer calls “The first environmental disaster,” Sumerian cities farmed their fields to the point that—thanks to salinization—crops failed. We might look back and say “If only they had known…” But they did.

As Bauer writes in The History of the Ancient World, “The farmers of Sumer were not so ignorant of basic agriculture that they did not understand the problem.” But there were mouths to feed, troops to maintain, taxes to pay, and well, that was just how things were done. And so went Sumer onto the ash heap of history. Others followed. More still may. We need to do better.

In a chapter on Indigenous leadership, Klein writes about the Gwitchin climate emergency declaration Yeendoo Diinehdoo Ji’heezrit Nits’oo Ts’o’ Nan He’aa. As he notes, that title translates as “After our time, how will the world be?” Though we have lost time, there’s still enough left to decide to leave a better world. But if we are to choose a better world, then we must mobilize like our lives depend on it; we must mobilize as if we are off to a good war.