A new look at Thomas Malthus

A review of 'Malthus: The Life and Legacies of an Untimely Prophet' by Robert J. Mayhew 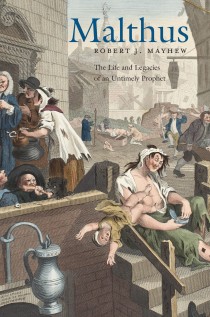 MALTHUS: THE LIFE AND LEGACIES OF AN UNTIMELY PROPHET

After two centuries of abuse and misrepresentation by everyone from Romantic poets to capitalist fundamentalist philosophers, Thomas Malthus—mild-mannered English clergyman and author of
An Essay on the Principle of Population—is perhaps the most maligned of all 19th-century thinkers. His central claim was that arithmetical gains in human productivity were always eventually overrun by the geometric increases in human population that they sparked: “Result, misery,” to adopt a Dickensian phrase. His central sin was to declare this just as the immense productivity gains of the Industrial Revolution were gathering steam. For some critics, Malthus is the next thing to an idiot (for his inability to foresee the future), for others a man with a heart of stone: Ebenezer Scrooge, who thought the poor should die, the better to “decrease the surplus population,” is his fictional caricature.

Mayhew, a historical geographer at the University of Bristol, is having none of it. To think of Malthus as a man who liked the idea of useless mouths freezing to death every winter is unhistorical in the extreme. Malthus was interested in blocking, by what he called “preventive” checks (delayed marriage, mostly), the excessive population that history had shown him would surely live in misery until it was killed off by “positive” checks (famine, plague, war). He was right, as his few fans have pointed out, about every agricultural society before him. Malthus was even right about his own time: he was inspired to write his book by his awareness of England’s increasing agricultural productivity, which to him was creating not a more prosperous working-class population but simply a larger one. When the crash came in Britain, as it always had before, perhaps from bad weather—Malthus kept an early eye on what climate data he could find—what then?

In short, Malthus was the first, and for a very long time, the only environmental economist. Mayhew acknowledges this truth will be difficult for both the contemporary right and left to wrap their minds around, for Malthus’s principles and conclusions cut right across the modern ideological divide. He did think poor relief should be kept just an inch above starvation, to discourage the labouring classes from having more children than they could afford, but he preached population control and the natural limits of growth; today, he might even have embraced a Chinese-style one-child policy. Above all he thought hard about the nexus between population, resources and, yes, climate. Even if his answers to those questions have been overtaken by science and technology, Malthus’s primary concern, the same as environmentalists’ today, remains relevant: sustainability.