A book to inspire both pleasure and paranoia

A review of The Encyclopaedia of Liars and Deceivers, by Roelf Bolt 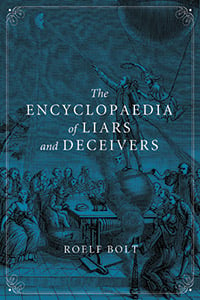 THE ENCYCLOPAEDIA OF LIARS AND DECEIVERS

Another intriguing title from a smart and intriguing publisher (London-based Reaktion), Bolt’s is a book to inspire both pleasure and paranoia. The latter is not just from the cringe-inducing tales he tells, like that of untrained “dentist” Omid Amidi-Mazaheri, who tortured some 600 people—they were known to writhe in the chair, their fillings crumbled within days and he once dropped a hypodermic needle down a patient’s throat—while collecting $250,000 from Britain’s National Health Service between 2002 and 2005. No, there’s also the eerie way Bolt’s own story parallels some of the shadier characters he discusses: it’s hard to find much information on him before the searcher runs into the notice of the Dutch scholar’s death: untimely, at age 42 in 2012, from complications arising from diabetes. But assuming this is a genuine compilation of genuine (so to speak) fakes, con men and deluded lunatics—and not Reaktion’s contribution to a psychological experiment—the Encyclopaedia is a marvel.

Little-known stories include J.B. Brinkley, a 1930s quack who made a fortune treating impotence by transplanting goat testicles into men, while the classics include Karl Krall, who was profoundly convinced he had taught his horses to make complicated math calculations. Even after a scientist showed him how the horses were, in fact, more intelligent in the way they read Krall’s unconscious cues—he dipped his head when the hoof-counting reached the right answer—Krall kept his faith.

Then there’s everyone’s favourite Prussian, Wilhelm Voigt. In 1906 the German shoemaker (and ex-con) acquired a full army captain’s uniform from a number of thrift stores, commandeered a dozen soldiers in Berlin, and led them on to a train to the nearby town of Kopenick. There he arrested the mayor, seized 4,000 marks and ordered the soldiers to guard city hall while he returned to Berlin. Upon his arrest a few weeks later, Voigt became a folk hero. He went on to a successful tour of the U.S. and Canada, a wax statue in Madame Tussauds and a bronze one on the steps of Kopenick city hall; by 2006 he had his own German stamp. It was a kinder fate than what befell most of Bolt’s subjects: disgrace (historian Hugh Trevor-Roper for authenticating the “Hitler diaries”), jail (Amidi-Mazaheri) or death (sellers of contaminated milk in China).

But, as Bolt is at pains to stress, those were people who were unmasked. That didn’t happen to Reinhold Vasters until 70 years after his death in 1909, when a fresh look at his papers revealed the artist had created dozens of “Italian Renaissance” pieces showcased in major museums. If he had destroyed the records, Bolt notes, the MOMA would still be proudly displaying his Rospigliosi Cup as the work of Benvenuto Cellini. The author concludes that Vasters left his papers alone because he craved what many forgers crave: recognition as a master in his own right. In all probability the work of equally talented but more self-effacing forgers still adorns museum walls.