A road trip to gun country results in a book 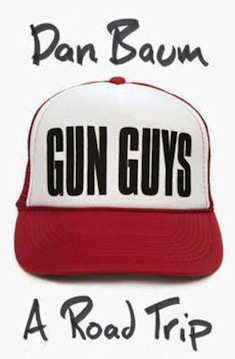 The journalist-cum-cultural anthropologist who conducts this expedition among the byways of U.S. gun culture is uniquely qualified for the job, precisely because he’s not (entirely) a stranger in a strange land. Baum is a New Jersey liberal Democrat—pro-union, pro-gay marriage, pro-Obamacare, even (for God’s sake) pro-UN—and also a guy who loves his guns. In the American gun debate, where the middle ground is as dangerous as the no man’s land between Great War trenches, Baum stretches across the divide like few others.

It doesn’t make him any more friends than being a partisan would. On the firing ranges, suburban shooters spraying 30-bullet clips from their lightweight plastic AR-15 semi-automatics looked askance at the writer’s heavy-as-lead, five-shot Karg rifle made for the Spanish-American War. They didn’t know that Baum thinks the AR-15, used in both the Aurora and Sandy Hook massacres, doesn’t deserve banning; it is, after all, “enjoyed harmlessly by millions of law-abiding citizens.” Nor do the customers in a Hispanic grocery shop in Colorado, backing away from Baum as he enters wearing a massive army revolver in an open holster, realize he’s on their side in the state’s bitter immigration debate.

Baum’s engrossing book is similarly bifurcated: he may have cast much-needed light on gun culture for those outside its orbit—even if they’ll find it unsettlingly sympathetic—but that wasn’t his personal aim. Baum already knows the lure of guns. What he was trying to figure out was why “a fondness for guns comes with political conservatism.”

And Baum probably won’t bowl over either side with his modest proposals for effective firearms regulation. Gun opponents have to stop calling gun fans literally insane for their passion, he argues, and gun lovers must stop thinking any and all regulation is the slippery slope to confiscation. Then the gun show loophole, which allows far too many completely unregulated sales, could be closed. A baby step, yes, but for Baum the only forward progress currently imaginable.