A roiling, rollicking Irish stew of a book 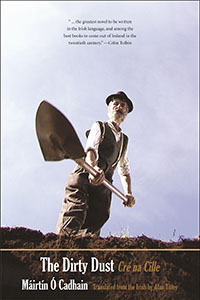 This mad, comic and often exhilarating novel, written in Irish in 1949 and only now published in English, is a fusion of Samuel Beckett modernism and ancient oral culture. Irish to the marrow of its bones, it’s a hymn to talk, not the power and glory of speech, but to the sheer rabbiting endlessness of it. The novel opens with Caitriona Paudeen—who approaches a kind of sublimity in her bottomless pettiness—ticking off the moment’s perceived insults. Did they wrap the rosary properly around her hand; is that a spot on her winding sheet; above all, is she in the one-pound grave or the 15-shilling grave? “F–k them anyway if they plonked me in the 10-shilling plot.”

Yes, sweet Caitriona is dead, and so is everyone else in The Dirty Dust, a whole village worth—plus the odd outsider, like the French pilot who crashed his plane nearby—lying under the muddy clay of western Ireland’s Gaeltacht, the author’s Irish-speaking home turf. (O’Cadhain, who died at age 64 in 1970, never heard a word of English until he was six.) There is a plot, although its pulse too can be hard to detect, turning on the relationship between Caitriona and her sister (and archenemy) Nell. As the presence of the pilot—a tribute to Beckett, who spent much of his life in France—might indicate, there’s a war going on in the larger world. But it barely registers below ground except to provide rallying slogans for family feuds. When Caitriona hears Nell has declared for Churchill, she immediately yells, “Up Hitler!”

In fact, as goes life in the Gaeltacht, so goes the afterlife—appallingly little changes for the villagers. Sure, the ones below can no longer move about like the ones above, and their hunger for gossip has to wait for the intermittent, if inexorable, arrival of the freshly dead for news. But that scarcely matters, for all the villagers wish to do is talk. And about truly important matters: love, hatred, betrayal, jealousy, long-ago slights and respect. Especially respect: what everyone really wants to know from new arrivals is what kind of cross their mourners erected. The finest, the crosses that best bear witness to the dead’s significance, are made of Connemara marble. (“If it’s not Connemara,” snarls Caitriona, “it won’t be worth a gypsy’s grunt.”) It’s the stone equivalent of what Titley’s brilliant translation has done for Mairtin O’Cadhain, resurrecting his jewel from the literary graveyard.