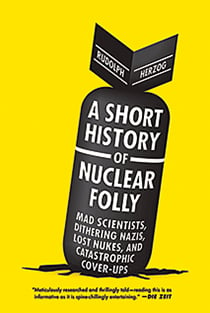 A Short History Of Nuclear Folly

Reading about human courtship of nuclear destruction is like watching the wobbles of an amateur tightrope walker: one gawks in terror and amazement. Herzog, son of the eminent filmmaker, offers a snapshot tour of the “frivolity, naïveté, and unscrupulousness” with which nuclear devices have been used since physicists figured out how to get a big bang out of a wee atom. This is not a scholarly or particularly well-structured book, and it reads more like a collection of cool stuff the author found while reading around the subject of nuclear madness. Yet Herzog will make your jaw drop with regularity.

For examples: Cold-Warring Soviets forced 40,000 soldiers to march into the site of a nuclear test explosion immediately after the ascension of its mushroom cloud, just to see what happened to the poor fellows; an influential American physicist sought to blast an alternative international shipping route to the Panama and Suez canals using nuclear bombs as convenient excavation devices; and, my favourite, plutonium-powered pacemakers enraptured doctors with their long-lasting convenience, except that no one bothered to keep track of them once the patients eventually died. Woe to the cremators.

Beyond the shocking “indifference to the fate of individuals” of the superpowers as they tinkered with their nuclear toys, Herzog identifies one central problem with the nuclear fixation: persistent failures of imagination. “No one was able to picture the worst-case scenario.” So it was typical that the Soviet Union gleefully built nuclear-powered satellites, but didn’t prepare for the possibility of them crashing back to Earth. As it happened, in 1977 a malfunctioning Soviet satellite with 45 kilograms of radioactive uranium on board crashed in the Yukon. American radiation detectors didn’t work in the Canadian winter cold, but thankfully some random mushers stumbled upon the wreckage. It could have been worse. Indeed, though there was plenty of folly, often fatal, we somehow avoided Armageddon.