A son's memoir: 'It would never have occurred to him that he gave me so much anguish'

Mark Abley writes about a difficult parent, a renowned musician who was unable to teach him how to be a man 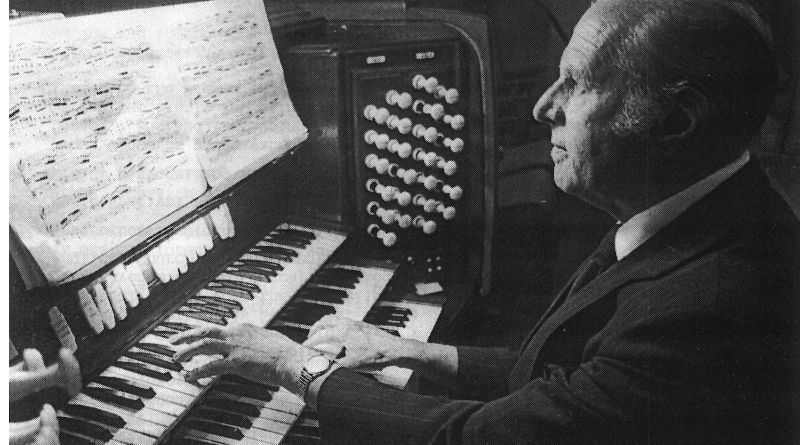 Harry Abley in Saskatoon, in the late 1970s or early 1980s. Abley was recognized as one of the leading organists on the prairies. (Mark Abley/University of Regina Press)

When poet and author Mark Abley was around nine years old in the mid-1960s, his parents had an argument that ended with his father walking out into the snowy Lethbridge, Alta., night. As Abley recalls in his new book, The Organist: Fugues, Fatherhood, and a Fragile Mind, his mother put her arm around him and said, “You’re more of a man now than he’ll ever be.”

Mark’s father, Harry, the titular organist, did return, in time for the church service he was supposed to lead the next morning, but he never provided the kind of reliable, traditionally masculine role model his son had hoped for. Harry did, however, encourage his son’s literary pursuits, even setting a poem he wrote at age six to choral music—much to the chagrin of Mark’s teenage self. On the phone from his home in Montreal, the author says it’s natural he should have written about their difficult relationship: “The more intense a person’s childhood is, the more baffling it is, the more need there is to make sense of it.”

In a publishing climate rife with self-serving celebrity memoirs, The Organist’s intimate scale and unstinting, probing honesty give it what should prove to be a more lasting appeal. Mark Abley touches on vexed and timely issues—not only masculinity but also mental illness, immigration and intergenerational tension—and suggests that art can play a role in resolving the conflicts to which they give rise.

READ MORE: A daughter to her widowed father: ‘It’s not too late to find happiness with someone new’

In the book, Mark fesses up to his limited ability to explain or even accurately depict his past, quoting T.S. Eliot: “These fragments I have shored against my ruins.” Strikingly, this admission adds to The Organist’s appeal. “One of the things that I tried to show in the book,” he says, “without a lot of breast-beating and overt agonizing, is how I misunderstood my father in various ways. This is absolutely not a memoir where the young man has all the answers and the old man does not.”

He invites readers to come to their own understanding of Harry, who at the centre of the book is both complex and intriguingly opaque. Mark portrays him as alternately opinionated and reserved, assured and hapless, grumpy and awkwardly warm—and consistent only in being emotionally undemonstrative, apart from when expressing his love for Third Division English football club Swindon Town. But he didn’t show any particular aptitude for sports—nor, Mark writes, was he “the sort of person who could take me on a camping trip in the wilderness, pitch a tent, light a fire and, as we roasted hotdogs over the low flames, turn to me and say, ‘Now listen, son…’ Manhood was not a state I found it natural to enter.”

And yet, Harry was success in his own sphere: in the late 1930s, he was a cinema organist of some repute, playing to audiences of over 3,000 in London, and sometimes billed bigger than the silver screen’s stars. When his profession died out, he reinvented himself in Canada as a choirmaster and church organist, as well as a composer and occasional concert performer, broadcast on CBC Radio. He took along his wife, Mary—who cooled her heels as a housewife, her teaching credentials disregarded in her adopted country—and Mark, their only child. Only when Mark left for Oxford as a Rhodes Scholar did he become aware his very presence had been causing a rift between his parents; he reasoned that he had displaced his father as the focus of her energy and attention.

He articulates the unworkable assumptions inherent in the postwar ideal of the masculine, effortlessly capable father figure: “A lot of men of his generation didn’t have much sense of what fatherhood entailed,” says Mark. “I don’t want to say my father was selfish—he was a very good teacher, for example—but he was certainly self-absorbed. Being a good parent means being able to put yourself imaginatively inside your children’s shoes… Maybe things have changed for the better in that men are now more able to do what women have always done.”

In The Organist, Mark also explores what he sees as his father’s struggle with (undiagnosed) mental illness. Although Harry could display compassion and empathy—he would compose a piano piece inspired by the embattled Mohawks in Quebec facing the Oka crisis, for instance—he was prone to episodes of unexplained and disturbing behaviour, including anti-Semitic rants: “There was a strong strain of casual anti-Semitism in mainstream Christian circles in Britain, and also in Canada,” says Mark. “My father was a sad example of that. He blamed Jews for having power of a sort he did not. It was a ridiculous way to look on the world, but that sense of not being able to cope with life, since other people were always doing things to him, was intimately connected with his depression.”

Later in the book, when they are both living in Montreal, Mark, who has been through therapy himself, suggests that Harry see a psychiatrist; Harry reacts with pointed silence. Says Mark: “My dad grew up at a time when psychiatric help was very hard to obtain, and [lacking] ordinary happiness was not something that needed therapeutic help. He also may have felt shame. He had become a father; he was able to earn a living: ‘What right do I have to feel depressed?’ ”

At the end of Harry’s life, his son cared for him as he battled cancer. When Mark found out the condition was terminal, his reaction was mixed—he writes about sadness, anxiety, relief and even exultation: “He’ll be gone within a few months, I thought. He’s finally going to die! I had been waiting for this moment for years.”

The passage is startling. Mark explains: “It did occur to me, ‘My God, what are people going to think?’ But it was important for me to write this book with complete honesty… That was what I felt in that moment, [with] the burden of his depression in Montreal and the strain that this put on my own life and on my marriage, and the knowledge that my mother lived with this grief for so long. Of course, I was appalled at myself for feeling that.”

A few years after Harry Abley died in 1994, Mark began to write The Organist, but after working through some of his more difficult memories, he set it aside, largely because he was afraid of how his mother would react when she read it. He took it up again when she passed away (at age 96, in 2012) and found that those painful memories had ebbed—including his recollection of the time his father had walked out. “Being able to write that down was a liberation,” he says. “I don’t feel as if I have to strain to understand things in my childhood anymore.”

Mark may not have shared his father’s talent for music, but his writing has afforded him a sense of release similar to what Harry derived from his playing. “Art is not the same as therapy,” he says, “but they can go hand-in-hand.”

He has often asked himself what his father would have made of the book; typically, there’s no easy answer. “I think he would be absolutely shocked and horrified at many of the things I disclose, but also, it would never have occurred to him that he gave me so much anguish. At the same time, I think he would be delighted that I took so much time, effort, and energy in writing a book about him, to pay tribute to him as a musician, and also, ultimately, as a father. In some ways, I am very like him. I hope he would see that.”