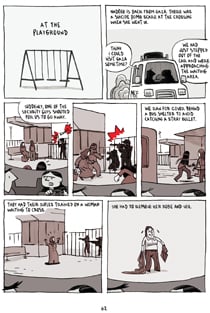 Over the past 10 years or so, while few people in his native Canada have taken notice, the comic book artist Guy Delisle has been busy writing wry, sharply observed graphic novels depicting life in some of the world’s most remote, strange and forbidding cities. Shenzhen: A Travelogue from China describes his stay at ground zero of the country’s wild economic ascent. Pyongyang: A Journey in North Korea is a postcard from the hermit capital. Burma Chronicles is the story of Delisle’s life as a househusband in Rangoon, where his wife worked as an administrator with the humanitarian organization Doctors Without Borders. “Some products have managed to take over the entire world,” Delisle, in one typically sardonic slice-of-life observation, thinks to himself in a Rangoon supermarket while holding a package of The Laughing Cow cheese. “You can’t go anywhere without finding Nescafé and The Laughing Cow. Here, this is the real face of globalization: a grinning red cow.” Later, spotting a man in robes and a shaved head at the same supermarket, he exclaims: “Wow, a monk in the cookie aisle.”

His latest book, Jerusalem: Chronicles from the Holy City, just released in English by Montreal publishing house Drawn & Quarterly, describes his time as a stay-at-home dad at the centre of the Arab-Israeli conflict. In sometimes amusing, often painful detail, Jerusalem outlines the absurdities of the city’s sectarian stalemate from the point of view of a mild-mannered Canadian cartoonist living in an Arab section of Jerusalem who just wants to find a decent school for his kids, buy diapers on the Sabbath, and maybe pick up a bottle of wine.

The book is fair, but it doesn’t pull punches either. As an outsider, Delisle can float above the political fray, pointing out the absurdities on all sides. “I try to be just really precise and honest with what I’ve seen and—that’s it,” Delisle says. “The reader can make up his own mind. He doesn’t need me.” While acting as an observer at a checkpoint between the West Bank and Jerusalem, after a kerfuffle prompts soldiers to fire tear gas into the crowd, Delisle sees a “vendor weaving his way through the chaos, hawking sesame bread at the top of his lungs”—a “surreal scene.” He witnesses Muslim women emerge from a lavish mall in an Israeli settlement laden with shopping bags; he himself has been too abashed to buy anything, heeding lectures that doing so would be to support what are widely viewed as illegal colonies. Elsewhere, strolling through West Jerusalem with his small son, Delisle recalls that “this is the spot where a bulldozer plowed into the crowd last July”: the Palestinian driver killed three and injured 46. The details spool over an otherwise ordinary walk among strangers, an eerie reverie. “I swear, when you see the spectacle religion puts on around here, you don’t feel like being a believer,” he writes. “Thanks, God, for making me an atheist.”

Jerusalem’s appearance in North America is sure to stir up controversy among those with deeply held positions on the advisability of the Israeli settlements, Israel’s treatment of the Palestinians and Zionism in general. And it will no doubt cement Delisle’s reputation as a master cartoonist working at a time when mainstream North America grows increasingly accepting of the graphic novel—a grudging acceptance, albeit, still developing almost 25 years after Art Spiegelman won a Pulitzer for Maus, a graphic narrative of the Holocaust. All of Delisle’s books have been highly praised and widely translated. The French edition of Jerusalem, released in November, sold 70,000 copies in two months and won the Fauve d’Or at the Angoulême International Comics Festival, the comic book equivalent of best film at Cannes. “He’s a star in France,” says Bart Beaty, head of the English department at the University of Calgary and author of the upcoming Comics Versus Art. “He’s very much a key player in the new comics movement of the last 20 years—this generation of people who grew up reading adventure and humour comics like Tintin and so know how to do them, but who have applied those skills to genres like travel writing and autobiography.”

Delisle will soon be better known on this continent: the impeccably credentialed U.S. magazine Foreign Policy recently ran an excerpt of Jerusalem—it particularly notes his attempts to “outsmart Ben Gurion airport’s legendary security screenings”—and Delisle is about to undertake his first-ever North American book tour. At 46, he has lived most of the last 25 years in Montpellier, in the south of France. He likely would not have made it in comics had he stayed in Canada, and he is in many ways a European cartoonist, with a sensibility indebted to artists who remain largely unknown in this country. He grew up in Quebec City, where his father was a technical draftsman at a pulp-and-paper mill and his mother was a teacher. His early reading included all the Franco-Belgian classics—Astérix, Tintin, Lucky Luc—but he later gravitated toward a wave of cartoonists who in the 1970s dared to aspire to an adult audience: Marcel Gotlib, Philippe Druillet, and Jean Girard, also known as Moebius (whose architecturally grand sci-fi visions are echoed in Delisle’s depictions of austere Pyongyang, “a city lit only by the headlights of cars and monuments to the glory of the great leader”).

He studied animation at Sheridan College, outside Toronto, and animation work kept him busy in the 1990s in Germany and France. But he began contributing comic shorts to Lapin, a magazine printed by a small, Paris-based independent publisher, L’Association, responsible for introducing an influential cadre of French cartoonists to readers in the 1990s, including Lewis Trondheim, David B., and a score of others. More and more Delisle came to subsidize these personal projects with contracts in children’s animation. “I was thinking I’d do that all my life,” he says, “and I would have never guessed at that time that books like Pyongyang or Shenzhen would sell so much.”

It was the new vogue in outsourcing cartoon grunt work to cheap Asian studios that first sent him outside Europe to live. In 1997 he set out to write a short work about life in the new China, and hit upon the idea of casting himself as the naive protagonist—he compares his Chaplin-esque alter ego to Voltaire’s Candide—eating dog, watching the mad erection of buildings and seeing first-hand the ideological ambivalence of the urban Chinese. “In France we have Communists in the government,” he tells a portly colleague in Shenzhen; the man responds with an uproarious belly laugh. “In China, laughter masks a variety of emotions that are difficult for foreigners to interpret,” he writes. “I’m afraid of Communists,” the portly man abruptly tells us in the next panel. In Pyongyang, Delisle smuggles George Orwell’s 1984 into North Korea. Later, his North Korean translator asks if he has any books he can borrow. “I’ve got just the thing,” Delisle says, handing him the Orwell novel. “It’s science fiction.” The gesture proves deeply awkward for the translator: “I don’t really like science fiction,” he tells Delisle later, overcome with the jitters; he’s clearly read it and recognized his reality in Orwell’s fiction. (Delisle has heard North Korea’s apparatchiks were unhappy with Pyongyang.) “When I do these books I have the feeling I’m writing a long postcard to my mom,” Delisle says. “Except now I write for my readers. And I really feel the reader sitting next to me and I say, ‘Let’s go over here, there’s a great place I want to show you.’ ”

In Burma Chronicles and Jerusalem he’s no longer the animator abroad, but a dad—his next book, Bad Dad Guide, will lampoon his own parenting—and husband to Nadège, an administrator with Doctors Without Borders, known in French as Médecins Sans Frontières, or MSF. His eye is as sharp when it comes to the foibles of the expat community. Of one of his wife’s colleagues, he observes: “Asis, like just about all the MSF doctors I’ve met, smokes a pack of cigarettes a day.” In Burma he uses his toddler to try to charm his way through a military checkpoint outside Aung San Suu Kyi’s home. In Jerusalem his clueless comic book alter ego finds the streets of East Jerusalem strewn with trash and asks an expat: “We’re in Israel, right?” “Well,” goes the reply, “it depends.” The book ends up being a useful primer for readers mystified by the Arab-Israeli conflict. “I’d feel embarrassed to put in anything fictional,” he says. “I get lost easily, but I’m curious. I want to know what’s going on and I want to go there if I can.” All the more reason to lament that Nadège has left MSF, and that Jerusalem may be Delisle’s last time discovering a city and showing us around.