A tale of bad luck and big kindness 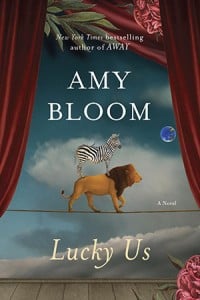 A lot happens in this gorgeously written, funny, picaresque novel set in America in the 1940s. There’s so much treachery and scandal, and so many richly drawn characters, in fact, that at times it reads as though several first-rate short stories (the literary form for which Bloom is acclaimed) have been pulsed in a Vitamix. One page in, it’s clear the title is ironic; the only luck the novel’s caustic, sharp-eyed narrator, Eva, has familiarity with is bad luck. She’s 12, newly dumped by her grifter mother at her father’s front door in small-town Ohio after his wife dies. “My mother said we should drive down to his place and see what might be in it for us,” Eva explains.

The duo decamp to Brooklyn with a colourful makeup-artist father figure in tow; Iris finds work as a governess for a wealthy family and falls passionately in love with their married female cook; Eva befriends the cook’s husband, whom she likens to “a big, wise animal, the kind that saw you before you saw it” and becomes a tarot card reader wise to her customers: “They run to my tiny table to have me say that what they see will not happen.” While she’s scripting fortunes, her own life unfurls in unpredictable ways. For one, a new family comes to surround her that includes their bounder father, his black-passing-as-white singer girlfriend and a boy they stole along the way from an orphanage.

And that’s not the half of it. “Whatever the opposite of miraculous is, that’s the word I’m looking for,” is how Eva wryly describes another downturn in her life at one point. When one character tells her, “People, they can’t be underestimated,” readers know it’s not a compliment. Yet amid all of the bad luck and tragedy also exist acts of outsized human kindness and unlikely salvation—so much so that by the end of Lucky Us, its title actually rings true.