A Thatcherite’s obituary for the European Union 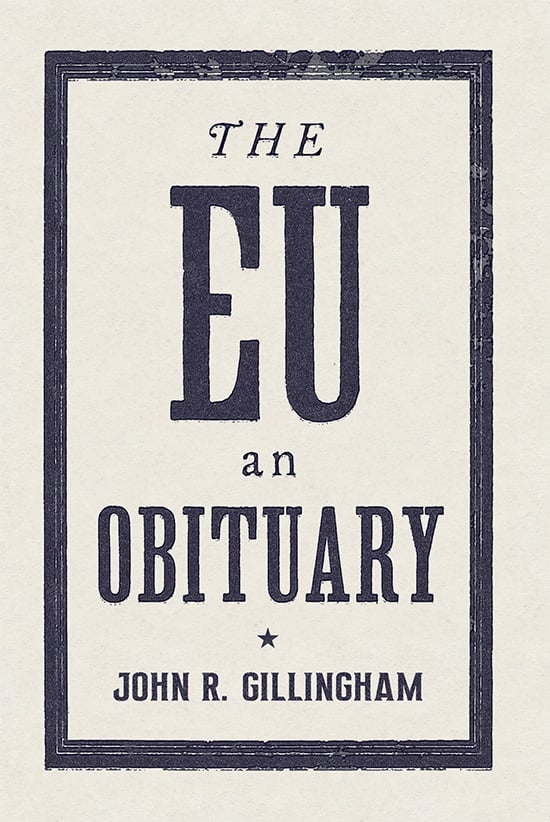 The EU: An Obituary

In this cleverly Brexit-timed release, Gillingham, an emeritus professor at the London School of Economics, attempts to counter the narrative of easy and inevitable European integration by looking at incongruous moments from EU history. He assesses the present crises (refugees and economic stagnation), names the most important future one (sovereign debt) and pronounces the patient dead.

His major claim is that exogenous forces like superpower rivalry and world trade created the EU, producing the “ill-conceived” Maastricht Treaty and “fatal” euro. The result, he says, is a union lacking a constitution but amply supplied with a “Eurocracy” of mysterious size and expense—which makes it sound to this reader like Kafka’s castle, since nobody knows exactly how it works but everybody has a story about it. He assesses both postwar peace and economic boom as independent of European federalism, whose real origins he traces to many now-forgotten projects like the European Defence Community, a military sham designed to lock the old world in a satellite orbit to the new.

The EU, in this telling, emerges not as the result of any one plan but as the scrambling failures of many. Gillingham pays particular attention to the influence of American politicians, and his major characters are generally allowed one accomplishment in narratives of blithe incompetence and stalwart self-interest. It makes you wonder what a similarly critical—even cynical—look at any country’s history would reveal.

The book reads the 2004 rejection of the European Constitution as a predictable flame-out after years of bad decisions, a forced march to federalism during which, according to Gillingham, only Margaret Thatcher knew what she was doing—on the terms of multinationals and not states, it should be added. Depending on your political views, this was either a reality check or a betrayal of democracy, but this is an unabashedly neoliberal book. The argument is used today when contemporary European federalists are called out for stubbornly resisting international capital. Are they self-interested mandarins or anti-monopolists?

Probably both. In Gillingham’s final assessment, Brussels is too disorganized and too large, while lacking the tools it actually needs, like a real central bank. The prescription is democratization, the renationalization of political institutions and the end of the euro, but it will never happen. This is obviously not a hopeful title, but such shock histories do a service by making lazy thinking more difficult. If accident and political self-interest are the real origins of the half-built European house, what could strategy and collective vision accomplish?