A true-ish story of a Russian oligarch's rise and fall

Book review: Ben Mezrich's story of Boris Berezovsky, one of Russia's richest oligarchs, tries to fill in the gaps on a legacy steeped in mystery 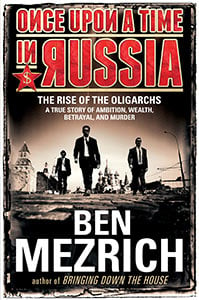 ONCE UPON A TIME IN RUSSIA

The mass sell-off of Russian state assets following the collapse of the Soviet Union created a new class of men known as oligarchs, whose wealth had rarely been paralleled, and whose power could save or doom politicians. In July 2000, 18 such men were summoned by Russia’s new president, Vladimir Putin, and warned that although they would be allowed to keep their billions, they had to stay out of politics. Underlining the severity of Putin’s warning was the location of the gathering: a dacha that once belonged to the Soviet dictator and mass murderer, Joseph Stalin.

It’s a telling anecdote, one that nicely foreshadows a major plotline in Mezrich’s book: the clash between Boris Berezovsky, one of Russia’s richest oligarchs, and Putin, the man he helped bring to power but against whom he later turned.

The meeting might have transpired as Mezrich describes it, but we can’t know for sure. Although the book title says this is a true story, Mezrich provides few details about his sources. An author’s note reveals that “some settings” and “certain descriptions” have been altered to protect privacy. Then, in tiny type on the page containing the publisher’s address and copyright information, we are told that many characters, locations, physical characteristics and other descriptive details have been changed. And: “Some of the events and characters are also composites of several different events and persons.”

The broad strokes are certainly true: Berezovsky’s astronomical rise; how he turned on Putin; his exile to London; his failed lawsuit against his one-time protege and fellow oligarch, Roman Abramovich; the murder by polonium poisoning of his associate and former Russian secret service agent Alexander Litvinenko; and Berezovsky’s sad descent into irrelevance and apparent suicide by hanging in his bathroom.

Mezrich’s book is about ﬁlling in the details. These are rendered in short, drama-infused chapters that are brisk but often lack depth. Even when superficially told, however, the book is compelling, in parts. Shortly before his death, Berezovsky wrote Putin and pleaded for forgiveness and to be allowed to return home. It’s an action that suggests a confused and tortured soul, and perhaps a president who had become so powerful, even his most ardent foe believed he had no option but to seek reconciliation. It’s a sad story, as much about a country as its oligarchs.