A whimsical and enlightening history of the circus: Book review

Larissa Liepins reviews The Greatest Shows on Earth: A History of the Circus 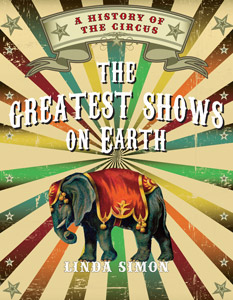 THE GREATEST SHOWS ON EARTH: A HISTORY OF THE CIRCUS

Before we had movies, television and Disneyland, there was the circus—a place that enabled us to “lose ourselves, to dissolve in wonder and bliss, to be transported by mystery,” wrote Henry Miller in 1959, one of the many artists and writers who populate this richly annotated and illustrated history of “the body as spectacle.”

Simon appears to specialize in mavericks, if her previous books— biographies of Thornton Wilder, Alice B. Toklas, Coco Chanel—are anything to go by. In this book, she starts in ancient Rome, when jugglers and acrobats offered light diversion between gladiator contests and animal baiting. She moves on to the hippodromes of 18th-century America and 19th-century England—where trick horseback riding enchanted both George Washington and Queen Victoria—before landing in turn-of-the-century Paris. Here, intimate, one-ring circuses found a receptive audience among the likes of Cézanne, Degas and Toulouse-Lautrec, artists whose idealized, romanticized renderings contributed to “the cultural myth” of the circus. (Toulouse-Lautrec, an alcoholic dwarf, was obsessed with capturing the acrobats’ “perfection of muscles, nerves, skill and technique,” while Picasso would spend entire evenings chatting with the clowns, enjoying “their awkwardness, their accents and their jokes.”)

Simon’s history is comprehensive, chronicling the rise of the golden age of American circuses. After the Ringling Brothers and Barnum & Bailey joined forces in 1918, the resulting mega-show became “a moving township of 1,600 people that travelled on four special trains of 100 cars each, carrying 800 horses and nearly 1,000 other animals.”

Simon does a fine job of exploring the subtexts of the circus. In addition to what is promised—“a living cabinet of wonders, a theatre of the improbable and even the impossible, an escape from reality”—the circus has always appealed to our baser instincts. After watching tightrope-walker Charles Blondin perform his wildly popular act in London in 1862, Charles Darwin wrote: “It is so delicious to see a man risk his life, without being in danger oneself, and so cheap, too—for only half a crown.” And while animal trainers were meant to demonstrate human courage in the face of bestial rage, acts using (much-abused) animals from Asia or Africa conveyed a message justifying colonialism and imperialism.

Above all, Simon shows how men and women over the centuries have been obsessed with controlling their bodies and, by extension, their minds—and how the spotlight and the “irresistible burst of applause” were often fatally addictive. Defying death again and again, and enduring unimaginable pain, the performers always returned to the ring. Lillian Leitzel, for instance, became a star in the early 1900s with an act that involved hanging by a loop wrapped around her wrist and throwing her body in such a way that her shoulder dislocated every time. “Her right wrist was everlastingly bruised and chronically abscessed from the pressure of the loop holding her while she did those marvellous throw-overs,” recalled fellow performer Tiny Kline. “Enduring the torture of live tissue being torn from her, she must have been a saint.”
Or, as Karl Wallenda—who’d lost several relatives to falls from the family’s high-wire “human pyramid” act—put it, “I feel better up there than I do down here. It is my whole life.”

In sum, the circus has one constant, Simon writes: the celebration of the fleeting moment of magical spectacle. There is laughter, awe, desire, envy. And then, it’s gone.