A whole new picture of the origins of the Great War

Review of July Crisis: The World's Descent into War 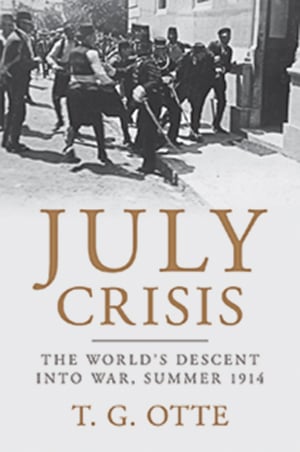 We write history not just for our own times but from them. The world a century ago, with its shifting power centres struggling for economic, military and political influence and would-be suicide assassins aiming for symbolic targets, looks more familiar to us than it did during the Cold War, and so historians like Otte are painting a whole new picture of the origins of the Great War. Otte points to developments little noticed in the older narratives: English-language historians obsessed with an Imperial Germany hell-bent on continental domination, or of statesmen “sleepwalking” into disaster. There was growing—yes, actually increasing—co-operation between Britain and Germany that had defused Balkan tensions in previous years. As a rising power, Russia, far from being a pre-revolutionary basket case, inspired fear for the future in Germany. And as other recent histories have also done, July Crisis stresses the crucial role played by the ramshackle Austro-Hungarian Empire and its criminally reckless ruling elite.

But the best part of this virtuoso examination of the 38-day political and diplomatic crisis that stretched from the June 28, 1914, assassination of Austrian Archduke Franz Ferdinand to Germany’s Aug. 1 declaration of war on Russia is the way Otte, a professor at the University of East Anglia, restores individual actors to where they should be: at the centre of historical events. Once it began, the First World War was so unpredictable in its course and so momentous in its outcomes—some of which, like the current Iraqi crisis, the world is still working through—that historians have increasingly tended to pin its outbreak on huge impersonal forces, a socio-economic-technological horror story whose time had come. By poring over archival records and postwar memoirs (the latter with a properly jaundiced eye), Otte brings to light the calculations (mostly bad) and motivations of the handful of men whose decisions brought Europe to catastrophe.

For every ambassador who correctly read the mood in his posting and sent accurate but ignored warnings home (Germany’s man in London), there was another (the French ambassador to Russia) who misled both his own and his host government. In chanceries everywhere there were men obsessed with national prestige who knew what they were risking but who nonetheless were sure it was the other guy—also obsessed with national honour—who would back down.

Collectively, Otte judges persuasively, a century of general European peace had robbed the decision-makers of any tragic sense and the caution that might have brought. They didn’t so much sleepwalk into war as rush headlong into it, and were still astonished at what they wrought.