A woman's memoir based on the accounts of friends and family

A review of 'I forgot to remember: A Memoir of Amnesia' 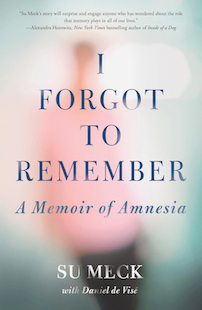 I forgot to remember: A Memoir of Amnesia

How does a woman write a memoir if she can’t remember her past—not her parents nor her hometown, not her high school sweetheart nor her husband, not her baby boys nor their births? In I Forgot to Remember, Su Meck relies mostly on the accounts of friends and family to create a portrait of her life before a kitchen ceiling fan fell on her head in 1988. That freak accident, when Meck was just 22, resulted in a rare condition called “complete retrograde amnesia,” which erased her episodic, semantic and factual memory—her ability to recall personal experiences, names, places and concepts. For years, Meck couldn’t read or write, and she struggled to create new memories. Peculiar survival methods emerged: Cupboard doors were always kept open so she could locate items for those uncommon occasions when she knew what she needed, say, to make dinner or do laundry.

Despite her affliction, Meck raised her children—two sons who were under two when the fan fell, and a daughter born in 1992—mostly alone, while her troubled husband wrestled with his own demons outside of the house. He called his wife “Su 2.0” after the accident because she was so different from the woman he married. In her own mind, Meck was the same age as her kids, all of them acquiring language and skills together over time. In many ways, she relied on them more than they on her; Meck’s eldest taught her how to tie shoes.

But as she gained the ability to remember and learn, other upheaval threatened her progress and sanity: The family moved overseas and around America often; dark secrets surfaced. I Forgot to Remember, which was written with the elegant assistance of a Pulitzer prize-winning journalist, is more than a memoir or report on the devastating effects of traumatic brain injury. It is a shocking story about betrayal and trust.

The book asks what it means to love someone: Are familiarity, dependency and shared experiences the cornerstones of a relationship? Through Meck’s life, readers witness how the perception of others affects one’s sense of self. The ways in which memories are distorted by time, tragedy or wishful thinking are astounding. By the end of this book, readers might question whether anyone can actually remember what really happened in their past—and even whether they might, at times, be better off not knowing.