Adrienne Clarkson on 'the anguish of not belonging'

From 2014: Adrienne Clarkson argues that immigrant, not migrant, is the Canadian word 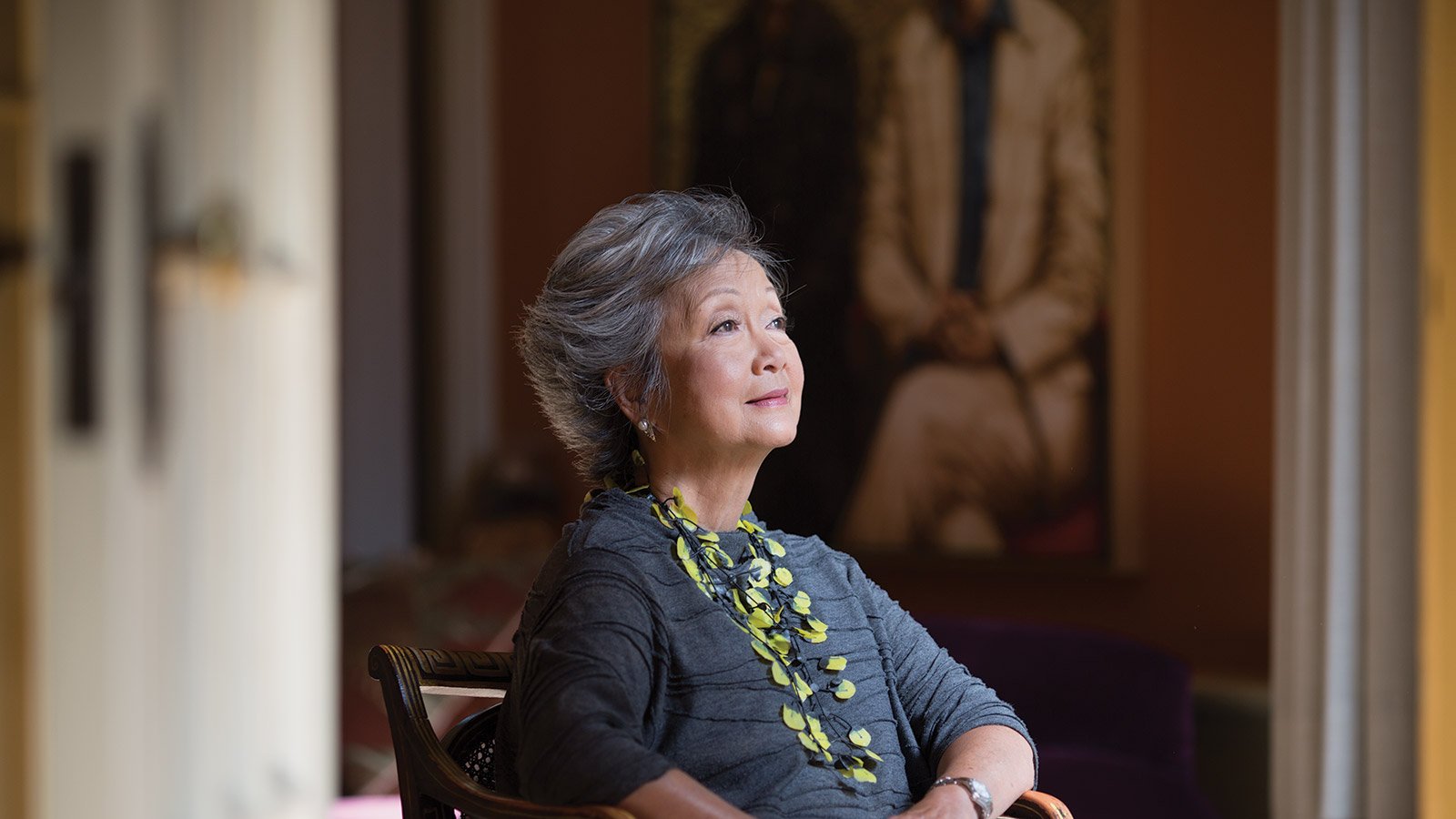 Small wonder, says Adrienne Clarkson, that the question of belonging—what it is, how it’s achieved, how much it matters—has preoccupied her for most of her life. When she arrived in Ottawa in 1941 at age two, the youngest in a refugee family down to a suitcase each, she says in an interview, she found a city “full of white people, white bread and white snow.” It didn’t hurt that the place wasn’t completely alien, the nation’s 26th governor general adds wryly: Clarkson’s Hong Kong family were subjects of the same world-spanning British Empire that still claimed Canada, and “my parents were enormously relieved that the postboxes were red.” But a warm welcome and, perhaps most important, a commitment to finding their place in a new land mattered more. That two-way street—the necessary embrace between old and new worlds—was Clarkson’s subject for the 2014 Massey Lectures, which are collected in a book entitled Belonging: The Paradox of Citizenship.

Over five linked lectures, Clarkson discussedthe roots of contemporary concepts of citizenship, from the interdependence of our natural competitive instincts and our profoundly social natures through to Bhutan’s commitment to Gross National Happiness. There are stops at the African concept of inclusion called Ubuntu, Greek democracy, and the French Revolution, which crafted an exclusionary notion of citizenship. (Clarkson recalls being in a Paris café in July when the French national football team lost to Germany in the World Cup. “When it was clear the game over, the French people in the café spontaneously broke into the Marseillaise. It was actually terrifying.”)

Blood and belonging are still tied in most of the world, she says, in a way they are not in Canada’s paradoxical citizenship. Here, a newcomer doesn’t have to give up everything to become part of the community, “We have so many different pasts now, we are so used to hearing and being enriched by others’ stories, by what has been called ‘the impossible sum of our traditions,’ that we give space to people in a way that doesn’t happen in Europe. The benevolent neglect of Canadians is the most wonderful thing: Once you’re here, paying your taxes, driving your car, living your life, people do leave you alone.”

Yet, if immigrants here don’t have to shed one past, they do have to take on another, under the demands of a citizenship that is less a birthright than “a choice.” Canada may be “a lovely country now,” but, like any other, it has had darker periods in the past, especially in its relationship with its Indigenous peoples. Becoming a Canadian “is like being adopted into a family: You take on responsibility for the crazy old aunt, for alcoholic Uncle Harry, and so on,” Clarkson says. “You don’t get to say, ‘All this happened before I got here and isn’t my problem.’ Canada can never become a country worth its salt if its people say things like that.”

That was never Clarkson’s response to Canada and its history in a life that took her from refugee girl to the highest office in the land. Her commitment to public service and public issues—including a topic close to her heart, the Aboriginal place in Canadian culture—was rooted in the sense of unquestioned belonging provided by her birth family. It survived a painful estrangement from her own children that lasted from her 1975 divorce to after her installation as governor general in 1999. When Clarkson speaks, in her final lecture, about being “someone who understands the everlasting anguish of not belonging,” there are echoes that go far beyond her childhood. And to hear the warmth and pride in her voice now when she speaks of her hockey-playing 10-year-old grandson, and the work in a memory clinic of  “my daughter, the doctor,” is to realize that circle of belonging has been restored to her.

We are collectively the sum of our virtues and defects, argues Clarkson’s thinking and the course of her life. Canada has always been a land of the poor and displaced, whipsawed by climate and history. It has made us cautious, Clarkson says—“only about 84 people have died in political violence here, 78 of them in one day at [Louis Riel’s defeat at] Batoche”—and able to see past the otherness of strange new arrivals. “We remember we were once in the refugee position; if not us, then our fathers or grandfathers. Those stories come down in families.”

But that benevolent neglect can bleed into indifference, and Clarkson believes the Canadian body politic is not as healthy as it was. “We criticize, but we are not critical. We don’t pay as much attention to politics as we did and, when we do, we focus on clothes or orange juice prices, when we have much larger issues to worry about.”

That’s why she believes the voting age should be lowered to 16. “As governor general, I visited schools, and I found the most engaged and aware young people in high schools. By university, they have a lot of other things on their minds—like finding a job—but 16-year-olds are really paying attention.” ­For similar reasons, Clarkson supports the Australian model of compulsory voting, for gently forcing the general public to be more involved. Citizenship has its privileges, she says, and its responsibilities. To weaken either is to destroy both. 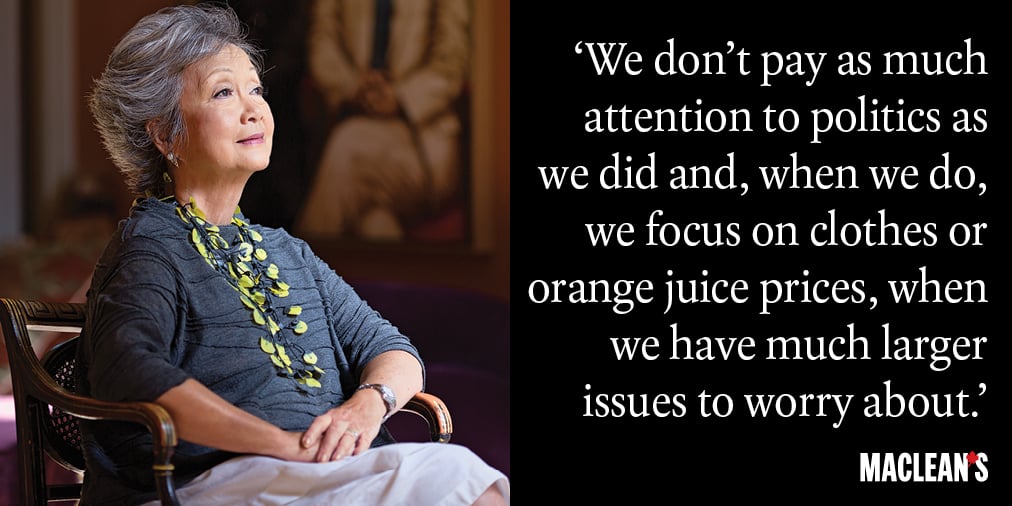 I have made belonging the interest of my life. I was, and am, a child of diaspora. I am someone who, for a while, did not belong anywhere. And I will always be someone who understands the everlasting anguish of not belonging. We arrived in this country under the shield of the Red Cross, stateless, as refugees. Then Canada took us in.

It was in attending public school that I truly felt a sense of place in this country. Still today I believe that a public education is the single most valuable institution that our society provides to help people belong. If we are going to continue to accommodate newcomers into society, we must continue to have well-funded public education—education paid for by the state, free for all citizens. This has been key to our success ever since our humble beginnings. Without public education, we cannot have a cohesive society, a society with shared values. Without public education, we cannot continue to fulfill the public good—that is, the internationalization and the continuation of our key notions and values from one generation to the next. We can do all of this only in a democratic structure, where all children are treated as equal, regardless of income. That is how people really learn to belong. That is what public education does. We want people who will take their place in our society, but that means we must make sure there are no barriers to inclusion for people who come here.

So belonging is essential to us in Canada. We select our immigrants with the idea that they will become citizens. Immigrants are future citizens, and we recognize them as citizens in the making. As Aristotle said in Physics, “With respect to what is eternal, there is no difference between being possible and being.” New citizens take on the same responsibilities as existing citizens: obeying laws, paying taxes, voting. And once a new citizen is adopted into the family of fellow citizens, he must accept the good with the bad, both past and present, in order to contribute to and help shape the future. Canada is the land of our ancestors, as it says in our national anthem, and we are each and every one of us adopted by those ancestors. Newcomers are not invited to this country to spend a few years working, only to depart like migrants. Migrant is a very ugly word, and it should have no place in the Canadian vocabulary. Immigrant is the Canadian word. And citizenship is central to our immigration policy.

I truly believe that you can find a place to belong, as long as there is a negligible amount of force against you. I was lucky to come to this country, where we operate in an atmosphere of benevolent neglect: We are left alone to get on with our lives. This is where perseverance and generosity come in. Canadians are generous, even when they don’t know it. To me, this flexibility is the generosity that leads to gross national happiness, because it allows people to persevere through hard times and come out on the other side.

We who have had everything taken away from us once, and sometimes twice, know what it means to begin that struggle and to continue it all our lives. And we can never listen to those who say their communities are fixed, their values forever, their identities unchangeable. Canada now has more people who know what loss is and what starting over means than people who don’t. The shock of the loss of country, possessions, and status is what has informed us as human beings.

And we have all been immigrants in the past; we share a collective subconscious in a way that no other country does. Many countries have shared a collective trauma. What we have here is a collection of diverse traumas. That is part of the impossible sum of our traditions, as well. We all know that we came from somewhere else originally, and we carry that history within us. It is part of our organism. Whatever country we originally came from, we cannot help but know within us, even several generations along, what kind of pain, loss, injury we endured. But out of that, we emerge not unblemished but rather with the knowledge that living in this country has enabled us to recognize that the past matters but that it cannot damage, destroy, or annihilate us. The true meaning of perseverance in our larger conception of happiness is that we are not simply washed clean and made new, but that we are able to absorb and overcome by helping to create at every moment, with every action, with every vote, with every public commitment, new standards for living life together, as a society, as a country. We have all been immigrants in the past. What matters is whether you define your life by what you have been able to recreate out of the past or whether you define it by what you have lost. And, like the unexamined life, the life defined by loss is not worth living.