Book review: All That Is 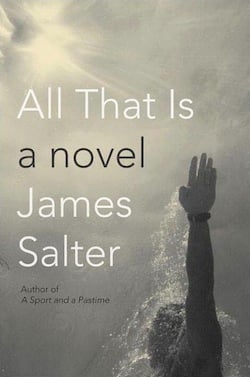 Salter has long been regarded as among America’s greatest yet most overlooked writers, a crafter of the most luminous sentences in modern letters. Until recently, his name might have rung a faint bell with only the most diligent readers, but now, with the publication of his sixth novel, his first in 34 years, he is everywhere, including a profile in The New Yorker. The two other things you need to know about this suddenly celebrated writer is that he is 87 years of age and he is famous for writing deliciously on the subject of sex.

This must be a gratifying episode in the life of a man for whom episodes seem to be important. Indeed, most of the book’s 31 chapters, and frequently passages within them, can be read as entirely satisfactory short stories, frequently with a strong whiff of autobiography and recollected anecdote.

We follow Philip Bowman, the subject of this odyssey, beginning in 1944 as a young Navy lieutenant in the Pacific. He establishes himself as a presence in New York’s publishing society, marries then divorces a privileged young woman with whom he has nothing in common, gets in some travel, attends fashionable dinner parties and, most importantly, sustains relationships with several women.

If there is a preoccupation for Bowman, it is the supremacy of love, or at least the pursuit of it. The sex act is his way to explore that connection and he does so with vivid intensity, as in this passage: “They made love as if it were a violent crime, he was holding her by the waist, half woman, half vase, adding weight to the act. She was crying in agony, like a dog near death. They collapsed as if stricken.” Gosh.

Though Bowman is the linchpin of All That Is, we dip in and out of the lives of those in his orbit, some of them distant acquaintances, often without Philip even peripherally involved to sustain any narrative purpose. It is an entirely original approach to novel writing and some readers will find it discombobulating. Salter knows he’s taking risks and believes the result—the story of an unextraordinary life well lived—is worth it.