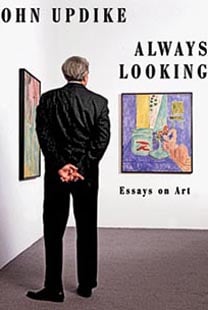 Novelist and critic John Updike died in 2009, before he could finish a third volume of his writing on art. Now there’s this posthumous “companion volume” following his two previous publications, Just Looking (1989) and Still Looking (2005). The new, lavishly illustrated collection is as insightful as its predecessors, with the cheeky fun associated with Updike’s free-wheeling art criticism.

Following his approach in previous essays, Updike likes to raise irreverent questions about blue-chip artists. How does the experience of looking at artist Richard Serra’s steel structures differ from simply walking around a shipyard? Do the women in Gustav Klimt’s famous portraits look like decals stuck on a collage of tinselly wrapping paper? What does a bad Monet look like? (He found three bad Monets in a 1990 exhibit at the Boston museum and accused the haystacks series of trying too hard). Updike loved the anxious René Magritte exhibit at the Met in 1992, but was disappointed by the Joan Miró show at MoMA (1993) for the thinness of the artist’s iconography and the isolating effect of Miró’s code-like symbols. He was more conflicted about Roy Lichtenstein’s cartoon-dot paintings. On one hand, Updike admitted Lichtenstein’s work has the vitality of folk art and noted how resplendent Lichtenstein’s painting looks in the Guggenheim’s coil-shaped museum. Yet, he slammed the work for its monotony and sometimes even vacuity, accusing the artist of repeating himself desperately. He also criticized the curator for layering the catalogue essay with 1990s-style political correctness over work Lichtenstein did in the 1960s.

One unintentionally funny thread in the collection is Updike’s harrumphing about navigating crowds at museums. He was regularly annoyed by what he called the gridlock of art-avid bodies. Twice in one essay he complained about having to “venture” to Brooklyn to see an Édouard Vuillard show in 1990 (I’m sure his Town Car survived). But even this cranky old man act could not mask the joy he felt being a gallery goer and soothsayer.