An affirmation of the universal heroism of working women

Book review: Elena Ferrante's 'The Story of the Lost Child' completes her series about two childhood friends, this one a reflection on aging and will 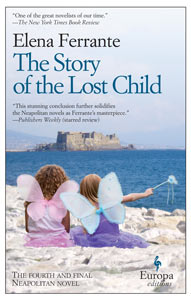 THE STORY OF THE LOST CHILD

Ferrante’s brilliant Neapolitan novel cycle began with Lila and Elena, whom we met in the first book, My Brilliant Friend, as schoolgirls in 1950s Naples. Throughout the series, Naples itself acts as a character of rich proportions, and the city and its people affect Lila and Elena’s lives in violent and surprising ways. Moving through the metropolis, with its petty thugs, dark alleys and poverty, Ferrante illuminates (and shakes down tired ideas about) the lives of working women. With the release of The Story of the Lost Child, the final volume in the series, readers are granted an epic masterpiece (think Tolstoy, Chekhov or Stendhal) that fits this subject matter in all its guts and glory.

At the end of the third volume, Those Who Leave and Those Who Stay, Elena, the narrator, is climbing into an airplane for the first time, leaving her husband, Pietro, and daughters, Dede and Elsa, behind and joining Nino, her childhood love. Lila has returned to the neighbourhood, earning power the old way. Both women have experienced births, marriage, work and death, ﬁltered through gender and class lines and historical and political eras, their friendship a pivot point on which all else hinges. The author’s handle on female rage felt exhilarating and exonerating in the first books, but, with this last one—following the women from the ’80s to the ’00s—it’s the examination of aging, of will and perseverance, but also of what is surrendered, that shines. We still suffer alongside, swelling with both pride and hate at every injustice, slight or success, but now, the familiar violence of their lives doesn’t quite carry the precariousness it once did. Time is on our side. Lila and Elena are allowed to untether.

This isn’t to say the last book is perfect. Some political references feel weightless and impersonal; other passages are almost dangerously well-tied-up, but, not since Doris Lessing’s The Golden Notebook (and that was published in 1962) has a narrative tome yanked the complex relationships of women, and the malaise of the non-American metropolis, into the harsh light of day with such passion and necessity. Women are made into universal heroes, without an ounce of pity, shame or excuse.