An ark story before Noah

A review of 'The Ark Before Noah: Decoding the Story of the Flood' 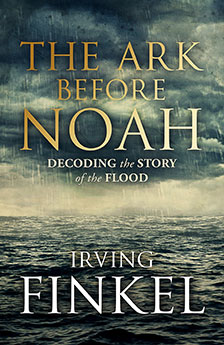 THE ARK BEFORE NOAH: DECODING THE STORY OF THE FLOOD

In 1985, a man came to the British Museum with a cuneiform clay tablet from ancient Mesopotamia. Irving Finkel, one of the world’s top experts on the wedge-shaped writing, immediately recognized its opening lines: “Wall, wall! Reed wall, reed wall!” It was from a flood story, though one with a Babylonian hero, ark and animals, instead of the Biblical Noah. Finkel would have to wait another 24 years before the collector would let him launch a detailed examination of the tablet, which dates from around 1750 BCE, far older than the Genesis story. “Weeks later,” Finkel recounts, “I looked up, blinking in the sudden light.” The tablet’s 60 lines contained a detailed instruction manual on how to build an ark, as well as the most famous boarding rules for animals: “Draw out the boat that you will make / On a circular plan; Let her length and breadth be equal . . . / The wild animals from the steppe / Two by two the boat did [they enter].” Included were specific measurements—it would be about half the size of a soccer pitch—and materials; even the depth of bitumen used to seal the hull’s exterior was prescribed to be one finger deep.

The tablet’s precise ark-construction guidelines are unique; other accounts are much vaguer in their orders. And, coincidently, it wasn’t the first important flood-story discovery to occur at the museum. Biblical scholarship was upended when George Smith decoded the first ancient Babylonian flood narrative in 1872. Now it’s Irving Finkel’s turn to rewrite history. His passion for the long-dead Sumerian and Akkadian languages, and his love for the ancient civilization that created writing and literature—as well as beer and accounting—comes alive in a delightful, entertaining book that skilfully meanders through subjects, such as how the stories passed from Babylonian cuneiform to Biblical Hebrew and why the ark tablet demands a round boat. (It only had to stay afloat with its precious cargo, not travel.) It turns out the description fits that of a coracle, a round boat used for millennia on the waterways of what is now Iraq.