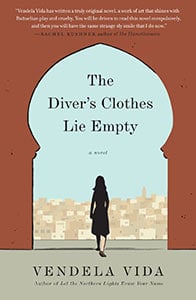 When you choose to narrate a book in the second person, you’re making a bold—and often fateful—decision. No matter how confident your abilities, no matter how skilled you are at crafting alternate worlds, the moment you begin to assess all events exclusively from the perspective of some abstract “you,” you run the risk of evoking a) an open letter, b) a second-rate version of a Lorrie Moore story (according to academic lore, M.F.A. supervisors refer to the overuse of second-person narration in their students’ work as “the Lorrie Moore effect”), or c) a Choose Your Own Adventure Book.

It’s rare to encounter a writer who uses this device with the clarity and poignancy Vida demonstrates in The Diver’s Clothes Lie Empty. Her fourth novel follows a woman heading from Miami to Morocco. The unnamed protagonist is unmoored, but not aimless: she’s escaping something, clearly; she’s equipped herself with a knapsack of essentials; she’s eager to lose herself in the romanticized otherness of Casablanca—until a guidebook with an unexpected sense of irony suggests that “the first thing to do upon arriving in Casablanca is to get out of Casablanca.”

As it turns out, not long after she arrives in Casablanca, her small knot of plans unravels. While she’s checking in to her grubby hotel, her knapsack is stolen; she loses her camera, her credit cards, her passport—in short, the few concrete reminders of her identity. As she slips from crisis mode into a sort of shock-fuelled fugue state, she gives in to the strangely pleasurable anxiety of being an utter nobody in a strange land. She takes on a series of alter egos: she poses as an American whose filched passport she’s given; she inadvertently finds a job as the stand-in for an Angelina Jolie-esque star who’s filming a movie in the city.

As time passes, we learn, in increments and flashbacks, about the life Vida’s protagonist has left behind—a distant husband, a dour twin sister—and the events that catalyzed her journey. These subtle revelations happen naturally, as one would uncover details about a stranger sitting nearby on an epic bus tour. Vida flicks at Thomas Pynchon’s postmodern hallucinations in the absurdity of a bureaucracy-triggered identity crisis, but her prose remains beautifully grounded. She is deliberate in the information she holds back, and the constant flickering between what you know and what you don’t leaves you with the strange sense that you’re immersed in a tremendously fulfilling Choose Your Own Adventure book for adults.