Giller Prize nominee Will Ferguson on his Elizabethan swindle, remade

Will Ferguson, 48, is a fine travel writer, a praised novelist and a funny man. The two-time winner of the Stephen Leacock humour-writing award is a nominee for this year’s Giller, opening the possibility of placing him in august company indeed: only Mordecai Richler has ever won both awards, in each case for Barney’s Version. Ferguson, who lives in Calgary, says curiosity and a measure of family lore set him down the path that ended with his shortlisted novel, 419. “My dad grew up in dust-bowl Saskatchewan and was always—for reasons never satisfactorily explained to me—suspiciously well-informed about the inner workings of con games, and full of tales of con men like Suitcase Simpson and Henry the Horse.” In the process of researching his novel Spanish Fly the writer learned about contemporary Nigeria-based scams. “The 419 Nigerian scams brilliantly combine greed and hope—you will get rich and you’ll help somebody. It reaches deep into the human psyche.” And when Ferguson’s tour through Nigeria’s oil-delta politics managed to summon empathy for the scammers as well as sympathy for the victims, the Giller jury found the result “entirely new: a global novel that tells us the ways in which we are now bound together.” Here is Will Ferguson on the story behind his new novel, followed by an excerpt.

Curiosity is a hell of a thing. One moment you’re strolling along a well-marked path, light of heart and free of care, when lo! you spot a twisting trail disappearing into the thorn-bushes, and you say to yourself, “That looks interesting.” So off you go, only to emerge two years later, mud-splattered and cross-hatched with cuts, your previous travel plans in tatters and miles from your original destination.

It started with a footnote. I was researching my previous novel, Spanish Fly, a tale of con men and call girls set amid the jazz clubs of the Great Depression, when I came upon a reference to the 419 Internet scam.

You know the ones: “Dear sir, I am the son of an exiled Nigerian diplomat and I need your help . . . ” At that time, I was only really interested in the classic “golden age” cons of the 1930s, so I didn’t pay much attention until I noticed an aside: “Today’s 419 email scam is a modern variation of the “Spanish prisoner” swindle which dates back to the Elizabethan era.”

In the wake of the Spanish Armada, many an Englishman had drowned, died, disappeared, and soon after, messages began to circulate—not as emails, of course, but written in quill and ink. “Dear Sir, I am the daughter of an imprisoned English nobleman and I need your help . . . ”

Now that snagged my curiosity! When I realized that these oddball emails cluttering my inbox could be traced back 500 years, I knew I was onto something much deeper than mere spam. The 419 fraud, I realized, was a tax on hope.

The technical name is “advance fee fraud” (the promise of a huge payoff down the road for small but never-ending fees up front) but they are more commonly known as “419” after the section in the Nigerian criminal code that deals with fraud.

The deeper I delved into the murky world of 419, the more aware I became that these emails were actually part of something much bigger. Here was the underbelly of globalization. It is a very dangerous game, 419, and one with horrific consequences. Victims will often get caught in a death spiral, desperately throwing good money after bad, trying to recoup their losses. They lose their homes, embezzle from employers, empty their savings, badger relatives for money, destroy relationships. When it’s over, many commit suicide.

What if someone went to Nigeria and tried to get their money back? But now I was curious about the people behind the scam. What if I told their story too?

I was deep in the thorn bushes now. A single footnote had expanded to encompass the oil-ruined landscape of the Niger Delta, the dust storms of the African Sahel, the Internet cafés of Lagos City. From footnote to a 400-page novel. Curiosity. It’s a hell of a thing. 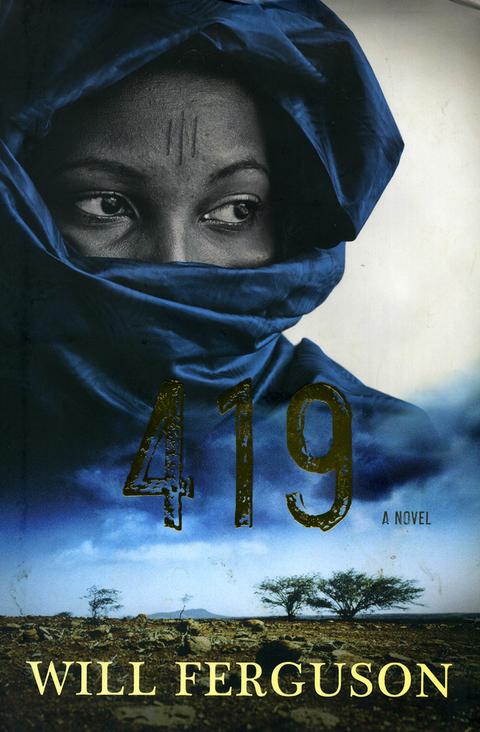 A car, falling through darkness.

End over end, one shuddering thud following another. Fountains of glass showering outward and then—a vacuum of silence collapsing back in.

The vehicle came to rest on its back, at the bottom of an embankment below the bridge and propped up against a splintered stand of poplar trees. You could see the path it had taken through the snow, leaving a churned trail of mulch and wet leaves in its wake.

Into the scentless winter air: the seeping odour of radiator fluid, of gasoline.

They climbed down on grappling lines, leaning into their descent, the lights of the fire trucks and ambulances washing the scene in alternating reds and blues, throwing shadows first one way and then the next. Countless constellations in the snow. Glass, catching the light.

When the emergency team finally arrived at the bottom of the embankment, they were out of breath.

Within the folded metal of the vehicle: a buckled dashboard, bent steering wheel, more glass and—in the middle—something that had once been a man. White hair, wet against the skull, matted now in a thick red mud.

His lips were moving as the life poured out of him to wherever it is life goes.

But no words came out, only bubbles.

Doors glide open, the sheets of glass parting like a magician’s gesture as the West African air swarms in, a heat so strong it pushes her back into the airport. She shields her eyes, stands a moment as the bodies shove past her.

On the other side of the pavement, a chain-link fence keeps the riff-raff at bay. Riff-raff and relatives. Taxi drivers and waiting uncles. Shouts and frantic wavings, hand-inked signs reading TAXI 4 YOU and LAGOS ISLAND DIRECT. She is looking for her name among these signs. Even with the jet lag and nausea weighing upon her, even with the flight-induced cramps in her calves and the heaving cattle queues she’s been corralled through, the customs officials who rummaged through her carry-on looking for stashed treasures only to throw her dishevelled belongings back at her in disappointment, and even with the sweltering air of the airport interior coming up against the blast-furnace heat outside, even with that, perhaps because of that, she feels oddly elated. Calmly excited.

Sweat is forming, the condensation that comes from colliding weather patterns. It trickles down her collarbone, turns limp hair damp and damp hair wet; it beads into droplets on her forehead. Somewhere: her name. She sees it being waved above the mob on the other side of the chain-link fence. But just as she is about to walk across, a voice behind her coos, “Madam?” She turns, finds herself facing an armed officer in a starched green uniform, sunglasses reflecting her face back at her in a wraparound, panoramic mirror. “Madam, please. You will come with me.”

It is almost a question, the way he says it. Almost, but not quite.

“Madam. You will come with me.”

She pulls her carry-on closer: the only luggage she has. “Why?”

“Airport police, madam. The inspector, he wishes to speak with you.”

The boy’s father was speaking softly in river dialect, as he always did when speaking truths. “A father, a mother, must ask themselves this. If it gives the child a better life, would they? Would they die for their child?”

The mangrove forests were breathing. Wet sighs and soft lapping sounds. The boy’s father, deep in tidal mud, was hauling in nets flopping with quicksilver as the boy stood on the shore, fishing spear ready.

“Remember,” said the father, switching to English for emphasis as smoothly as one might switch from net to spear, “Kill the fish quickly. It is kinder that way.”

“Laura? Are you there? It’s—it’s about your father. Please pick up.”

The sound of a sob being swallowed.

Laura spit into the sink, scrambled to the phone.

After they’d finished speaking, Laura hurried down the hallway, pulling on her jacket as she jabbed at the elevator button.

Outside the night air was crystallizing into snow. She crossed a street empty of traffic, ran-walked down the hill.

The bungalow of her childhood was a stucco-on-stucco arrangement thumbtacked to the side of a steep street. A police car was parked out front, with Warren’s brand-new Escalade hogging the driveway. It didn’t matter; Laura had nothing to park.

Inside her parents’ wood-panelled living room: a police officer. Holstered gun and pale eyes. Those crocheted throw-cushion covers that had been there since forever. The knitted afghan draped over the back of the chesterfield (both the cushion covers and the afghan her mother’s handiwork). And on the wood panelling behind: clunky oversized picture frames (her father’s handiwork, both the frames and the panelling). Mall-bought oil-painted scenes of Paris in the rain, of Matterhorn in sunlight. Might as well have been paintings of Mars; her parents had never been to Paris or the Alps. And now her father never would.