An end in sight for Sookie Stackhouse

Charlaine Harris, author of the novels that inspire 'True Blood', is wrapping up the series 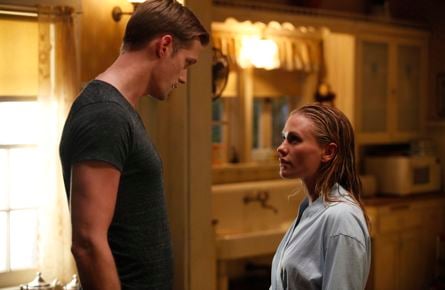 Charlaine Harris has been writing mysteries for decades. For a long time it was a “heavily subsidized hobby.” Then came the Sookie Stackhouse series of adventures set in rural Louisiana involving vampires, shapeshifters and even fairy godmothers. Suddenly she was famous. Now, with the release of her 11th book, Dead Reckoning, comes news that the series will soon end. But not without a lot of super naturals going to their “true death.” The Southern matron,  59,  cackles gleefully at the thought of all the blood she’s about to spill.

Adaptations of her books can be seen on HBO, where Alan Ball (Six Feet Under) has turned them into the massively successful True Blood series starring Anna Paquin and Alexander Skarsgard.

Q: The Sookie books were successful before Alan Ball approached you. You’d even had a few offers to adapt them. Why did you say yes to him?

A: Because he got me. He understood the mixture of comedy, horror and blood and sex that the books comprise. And he convinced me that he understood what I was doing, whereas other people were more into the vampire aspect of it, the violence or the sex scenes—you know there’s not a sex scene in every book, but when I do have a sex scene I like to make it good—they were emphasizing more one thing or the other and I just didn’t think they could bring it to a good resolution, but I knew Alan could.

Q: He’s made quite a lot of changes to your books—for example Vampire Bill is now king of Louisiana. Does he run the changes by you?

A: Why would he? He’s the guy who does TV. He doesn’t call me and suggest future story lines for the books.

Q: When books are adapted for the screen, a lot of writers then say they write for the actors, not the original characters in their heads. Can you separate the two?

A: Umm, I’m so far ahead of Alan and the characters in my head don’t look like the actors, though I’ve noticed a couple of times lately I’ve seen them creeping into the action in the book and I go “Wait a minute, who are we talking about here?” and I change my mental image to my people.

Q: Did you always have the series all figured out?

A: Totally not! (laugh) I didn’t because it took two years to sell the first book; my agent couldn’t find anyone who wanted it. When I finally did sign a contract I didn’t know if I’d ever get to write another one. Well, the first one was successful right out of the gate, which was a surprise to everybody. Penguin wanted more books and I signed a contract and I thought “Well, maybe I’ll get to write three more.” I’d never written a series that ran that long.

Q: In the books, there are vampires, then shapeshifters, werewolves, fairies and elves—as Bill says “I haven’t seen an elf in 100 years.” After a while do you not run out of super naturals?

A: I’m always trying to find something I haven’t used before that will keep me entertained to write about. I seriously doubt I’ll be introducing any new species in the remaining two books because I’m in the wrapping up process, not the expansion process.

Q: The last few books have been novels or adventures. Is lessening the mystery aspect a key part of the series’ success?

A: If I knew why they are so successful I would have done it a long time ago! The first books were really mystery-based because I come from mystery and that was really all I knew how to do, so I was going to include a murder mystery with each book. And also I wanted to bring all 10 of my mystery readers with me to this new adventure. Then the books got so big and complicated it felt artificial to stick a mystery construction on them. They were obviously adventures. I thought it was probably right for me to return to my original roots for the last two books.

Q: When you realized you were going to end with book 13, did you then start mapping it out?

Q: What can you say about the next book?

A: I’m deep at work on book 12 and of course there are going to be developments with Eric’s unfortunate situation, which is all I can think of to call it. [The 1,000-year-old vampire has been given to the queen of Arkansas] But a lot of the next book is a murder mystery going back to the roots of the books. And the terrible predicament the fairies are in.

Q: Does Sookie get to live happily ever after?

A: Won’t you be glad to find out? Everyone has a different idea of what happily ever after means. Sookie wants to be self sufficient, independent, she wants to have enough money to live on, she wants to be surrounded by the people she loves, she doesn’t want to get beaten up anymore and I think she’d be very happy to find someone to spend her life with because she’s a romantic girl.

Q: In May you became the fourth author to sell over a million e-books on Amazon’s Kindle. What’s the impact for you?

A: All my other works are back in print and being read more than when they were originally published. People say “oh these are so good” and I say “yeah, they were good 30 years ago too” (laughing). I didn’t make much money but I kept getting published. My husband referred to it as a “heavily subsidized hobby.”

Q: What does the e-book mean to other authors?

A: It gives writers who haven’t been successful in traditional publishing a chance to try their hand to try their hand in another format. I think that way you can find out if you really were put-upon all those years or if you’re a crappy writer.

Q: What format do you use to read books?

A: When I’m travelling I have an e-book reader. I got a Nook [from Barnes & Noble] and got my husband a Kindle so we could compare. I travel so much it seemed like a good idea. I can’t go somewhere without reading. At home I read real books, and that’s the nice thing—(in a whisper) people send me books all the time, it’s just like Christmas! I get them for free. Free books!

Q: Going back to the end of the Sookie Stackhouse series, it’s often the case that wrap ups involve a lot of blood, isn’t it?

A: I do like wholesale slaughter. I love writing death scenes so it’s going to be happy days for me! Sometimes I kill people off and resurrect them just for the fun of writing the scene! That’s why I’m so cheerful. You’ve never met jollier people than horror writers. They are hysterical. I’m happy.