An incendiary discovery of secret archives in Guatemala

A review of 'Paper Cadavers: The Archives of Dictatorship in Guatemala' by Kirsten Weld 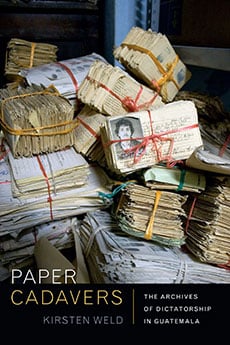 PAPER CADAVERS: THE ARCHIVES OF DICTATORSHIP IN GUATEMALA

After 36 years of brutal civil war, Guatemala entered into an uneasy peace in 1996. Although a UN-sponsored Commission for Historical Clarification looked for ways to cope with state perpetrators—who the commission estimated were responsible for 93 per cent of the human rights violations during the war—there was official silence at war’s end and a denial that records even existed. Then, in June 2005, a series of explosions at a Guatemala City military base—a forgotten cache of munitions left over from the war that rocked the national capital at the rate of 30 blasts per minute for four hours—spurred mass evacuations from nearby neighbourhoods. When it was all over, the enraged population demanded that the government check a nearby national police base in case they, too, had forgotten about their ordnance. When investigators from the human rights ombudsman’s office showed up to check, sure enough, there was a massive amount of firepower present, but there was also something even more incendiary.

There were hundreds upon hundreds of forgotten bundles of papers, spilling out of rusty filing cabinets, stacked against walls, buckling wooden shelves: the national police’s secret archives, all 75 million pages of them.

In early 2006, when the uncertain possibilities of permission and funding for studying the records were still hanging in the balance, Weld, a Canadian and assistant professor of history at Harvard, asked to join the human rights activists as a volunteer, and as the team’s own historian. Believing, Weld thinks, that an on-site foreign observer offered some extra measure of security, the Guatemalans allowed her in. A smart decision on their part: Weld’s chronicle of their efforts is extraordinary, less about an archive as a historical information source and far more about an archive as a subject, a history-maker in its own right.

For Guatemalans who had suffered under the murderous dictatorship—which had not just attacked indigenous peoples in the countryside but also strove to decimate or tame the nation’s critical thinkers—the archive’s discovery was an almost unimaginable victory. The documents remain at the police base, now utterly transformed from a decaying structure surrounded by concrete walls topped with barbed wire into a colourful, mural-adorned archive. Two hundred activists, now trained as historians and archivists, are dedicated to the restoration of their nation’s collective past, with all that means for its future.