And now, a word from the Oxford English Dictionary 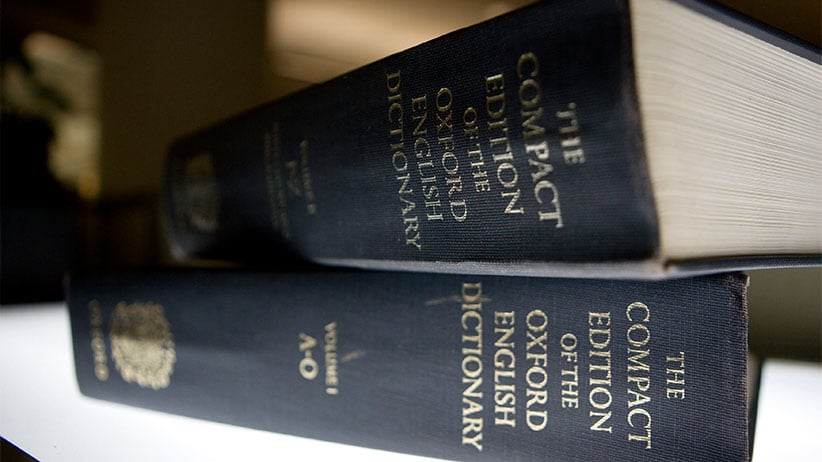 An Oxford English Dictionary is shown at the headquarters of the Associated Press in New York on Sunday, Aug. 29, 2010. (Caleb Jones/AP/CP)

Nothing expands the number of words in your favourite dictionary like a period of rapid technological change, when new objects and actions enter everyday life. Except, that is, a historically rare shift in the balance of power between dictionary-making’s two dominant schools, when the descriptionists—those who think their job is to record how language is used—are ascendant over the prescriptionists, who want to critique, control and perhaps change popular usage. The two word-expanding forces, in intimate tandem, have been driving dictionary growth for most of the 21st century. The techno-revolution that spawned the novel terms, from blog to unfriend, is both cause and effect of a prevailing populist ethos that also affects lexicographers. You can tweet your own take on the day’s news and you can use they as a singular pronoun: your choice. And that same digital technology means dictionary-makers don’t have to pile up the new coinages for years until a new paper-and-ink brick can be published. So it is that the venerable and prestigious Oxford English Dictionary, the Anglosphere’s gold standard, has taken to issuing quarterly digital updates.

The spring list, released June 27, displays the unprecedented pace of novel creations: more than 600 new words, sub-entries (expanded meanings) or senses. It created more headlines than most OED releases, for several reasons. There’s a new final word at the end of the line: Zyzzyva, a genus of South American weevils, bumped zythum, a malt beer brewed in Ancient Egypt, from its prominent place into well-deserved obscurity. Then there were, for the lead up to Wimbledon, no fewer than 50 new tennis terms to grace a sport already known for its eccentric vocabulary. For all that, the tennis group’s greatest ‘aha’ moment for many readers may well be its explanation, in passing, of one of the glaring inconsistencies in tennis talk, scoring that runs from 15 to 30 to—just as an observer is waiting for 45—40. Apparently, 45 was the original (and logical) count, and the change occurred centuries ago when the sum was more often rendered “five-and-forty:” the jump to four syllables from the two of 15 and 30 was too much for harried score-announcers and they simply chopped off the first half of five-and-forty.

But, as always, it’s sex and politics that grab attention, and there wasn’t any sexual terminology in this list. Most media therefore focused on woke. Awoken is the standard past participle of the verb awake, of course, but the dictionary also points out that some dialects of English, including varieties of contemporary African-American, have always used woke for that duty, which in turn gave the word “adjectival meaning.” By the mid-20th century in black American English, woke had extended its reach to mean aware in a political or cultural sense. In the past decade, propelled by Erykah Badu’s 2008 song Master Teacher and its association with Black Lives Matter, woke has gone mainstream with an even more exact meaning: alert to racial or social injustice.

The word’s new imprimatur marks a kind of pendulum swing, welcomed by the left side of the political spectrum. The right—especially the alt-right, itself a relatively new term for what was once fringe thinking on the farthest edge of the right—has been more fertile in neologisms lately. And the most prominent of its terms—cuck and snowflake—have not been descriptive of political stances but are what enduring political terms have always tended to begin as, contemptuous epithets for enemies.

The sting in the labels is what gives the words their potency and their resonance, to the extent they sometimes become what Merriam Webster editor Kory Stamper calls reclamation words. None has been more successfully absorbed and repurposed than tory, which once meant an Irish highway robber, and is now proudly used of Conservative party members by Conservatives in Canada and Britain. Some African-Americans allow use of the N-word, so toxic a slur it cannot be written out, among themselves (and absolutely no one else), while Stamper devotes a chapter of her new book, Word By Word, to the efforts of some feminists to turn bitch into a badge of honour.

It’s not very likely that cuck, short for cuckservative, will follow tory’s path. The ultimate origin there lies in the Old French cucuault for cuckoo, a bird that lays its eggs in other birds’ nests. Centuries ago it gave birth to English cuckold, delicately defined in the OED as “a derisive name for the husband of an unfaithful wife,” although the usual sense in medieval literature dripped with even more contempt: said husband was aware of the infidelity and allowed it—in a weak, womanish way—to continue. Hence the alt-right’s beloved cuckservative for a perceived sell-out conservative, too submissive to engage in manly political combat with the left. The insult to masculinity inherent in the phrase means even those moderates who might answer to RINO (Republican in Name Only) are never going to call themselves cucks.

But snowflake may yet have a life among the highly educated and irony-attuned millennials at whom it is usually hurled. The word has a lengthy history as mockery for those who think they are special, just like every unique snowflake. But in the past few years it has become attached to university students’ demands for safe spaces and against offensive speech, which are seen as emblematic of an actual snowflake’s other essential quality, its fragility. A lot of this, of course, is bound up with eternal intergenerational rhetorical warfare. Quite a few baby boomers, a generation who demanded attention in the days of its youth—and received it because they formed such a large percentage of the population—are not at all inclined to return the courtesy to their own offspring. (Talk about snowflakes.) In our current post-truth era—post-truth being Oxford’s Word of the Year in 2016, surely to be followed by fake-news this year—there is ample room for an eyeball-rolling reclamation of snowflake.