Book review: And Then There Were Nuns: Adventures In A Cloistered Life 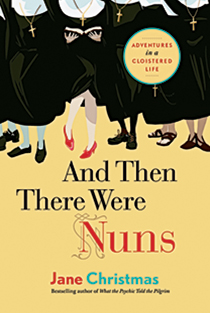 And Then There Were Nuns: Adventures In A Cloistered Life

Christmas always wondered if she was “nun material.” As a student at Toronto’s Loretto Abbey in the early ’70s, she admired the “secret-agent cool” of the sisters at the school, the way their “floor-length black habits swooshed and billowed like approaching storm clouds.” She found beauty in the opportunity for contemplation and compassion that convent life seemed to offer. Still, it would be 40 years before Christmas finally explored the calling. By then, she’d married and divorced twice, had three children, written three books, and had recently become engaged.

Her fiancé waited almost a year and a half as Christmas did stints in four cloistered communities, two Catholic and two Anglican. In fluid and often playful prose, she introduces women and men (she spent a week at a monastery on the Isle of Wight) who have devoted their lives to prayer, including a skydiving 90-year-old nun. She revels in the Gregorian chanting, which she discovers is as good for the body as it is for the soul, its 7,000-9,000 hertz of frequency giving the brains of chanters and listeners a boost. And she gleefully relates the awkward moments, such as being utterly flabbergasted when a fellow guest at the monastery asked her: “So, no sex today? None.” (In fact, he was referring to “Sext” and “None,” two communal worship sessions.)

What drives Christmas’s quest remains somewhat obscure. She raises the matter of a “midlife crisis.” She copes with an unresolved trauma that comes home to roost during the meditative silences. But there is also something about the way the nuns pray that she strives for. “Every day the sisters descended into the Pit of the Soul, picked at the seam of despair, sadness, tragedy, death, sickness, grief, destruction, and poverty, loaded it all onto a cart marked ‘For God,’ and hauled it up from the depths of concern to the surface of mercy, where they cleaned and polished it,” she writes. “It was heavy, laborious work.” But someone, Christmas concludes, has to do it. “It is hard to imagine what would happen to the world if people stopped praying.”