Anthony Bourdain: 'Look, it's not normal, what I do.' 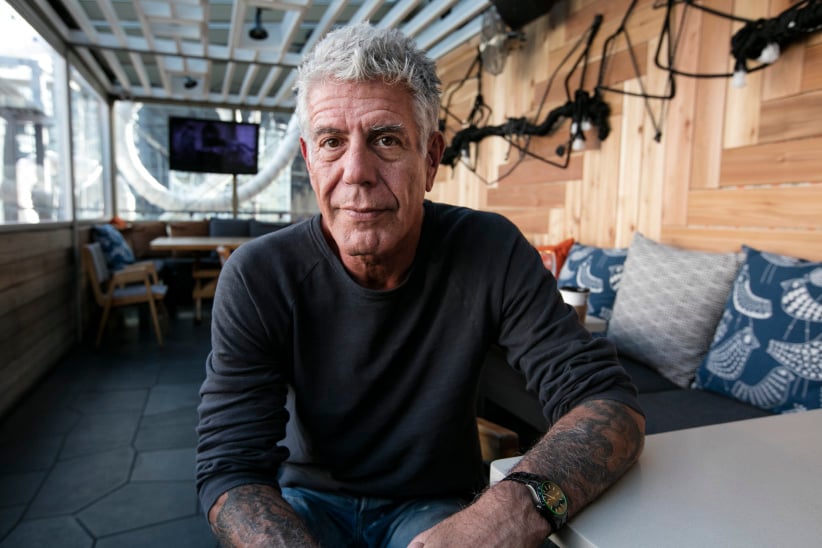 Calling Anthony Bourdain just a chef would be like calling poulet en vessie a chicken dish. Since his dazzling 2000 debut memoir Kitchen Confidential, a revolutionary read that revealed the bacchanalian secrets of his industry and made him into cooking’s enfant terrible, he’s become a true multi-hyphenate: a bestselling author of essays, fiction and travelogues; a jet-setting filmmaker finding treasures and truths in places around the world on shows like CNN’s Parts Unknown, a series whose influence is best reflected by a surreal September one-on-one interview with President Barack Obama in a Hanoi hole-in-the-wall; he’s helming a new international market in New York City; he’s even a competitive jiu-jitsu fighter. He hasn’t worked in a kitchen for years. Now, at 60, he’s returning to his roots, somewhat, with a new cookbook called Appetites—a bleeding, blazing thing full of Bourdain’s mesmerizing blend of vulnerable emotion and blustery writing, and the recipes for dishes he most frequently cooks for his top customers these days: his friends and family. Bourdain spoke to Maclean’s in Toronto about a bad boy becoming a dad, about the emotional toll of his amazing life, his role as a godfather for a generation of hard-living cooks, and why Canada’s culinary scene is great—Michelin stars or no.

Q: Why now, for a new cookbook? I ask not just because it’s been 12 years since your last one, but because for someone who has been so many things since, a cookbook feels oddly traditional.

A: Yeah. Don’t much care. It’s certainly reflective of a really important part of my life—I’ve been cooking for a nine-year-old and her friends for the better part of seven or eight years. It’s how I cook today, it’s what makes me happy. I tend to overcompensate for my long absences when I’m home by cooking and it’s therapeutic to me—it’s how I express love for my daughter. It felt good to do.

Q: And traditional, for Anthony Bourdain, isn’t a bad thing?

A: Look, I admire people who do things that are interesting to them, who don’t have a strategy or a master plan or have a brand—I don’t care about any of those things.

Q: You’ve written a fair few memoirs, but was writing a cookbook—with its intimate details, and its look into your family—just as personal?

A: Yeah. I think it’s important if you’re going to write a cookbook, it should sound like you talking—it should be things you actually believe, otherwise I’m not interested. Food is so personal—I mean someone is talking to you when people are cooking for you. I like to hear an identifiable voice. The cookbooks I value the most in my collection are the ones where you hear the author’s voice and point-of-view in every recipe—Fergus Henderson’s Nose to Tail [Eating], Marco Pierre White’s seminal White Heat, [Montrealers] Fred Morin and Dave McMillan’s book, [The Art of Living According to] Joe Beef. [Montreal’s Au Pied Du Cochon chef] Martin Picard’s book. There is clearly a guiding voice or a point of view, otherwise these are just a list of recipes, and you can get those online.

Q: It’s also a history of the places you’ve been to, and the stories tied up in them.

A: The older I get, and the more I travel in particular, the less I care about what exactly is in the dish than who’s cooking it and why.

Q: The book is dedicated to your nine-year-old daughter, Ariane. How do you juggle your busy life with being a father?

A: The best I can. I’m away 250 days a year. It’s a tough situation. But at one point I told my daughter, ‘Look, honey, I’m thinking of hanging it up maybe some day so I can spend more time with you.’ She burst into tears. ‘But daddy, your job is so interesting! What will I tell my friends?’

Q: How long do you see yourself working like this?

A: I have the best job in the world. I’m not going to get off the pony as long as they let me ride it. I go anywhere I want, do whatever I want when I get there, they let me make self-indulgent TV about that experience, and give me about as much creative freedom as anyone’s ever had in the history of television. What am I going to do? Take up needlepoint?

Q: But there is this flip side of this amazing job. You spoke strikingly about the loneliness of your travel and filming schedule, and about your September split with your wife in People: ‘It comes at a cost.’

A: Look, it’s not normal, what I do. Just being on television isn’t. Thinking that your story is so interesting that other people will want to listen to it or read it or pay to hear it, that’s—what kind of person thinks that? A monster of self-regard. It’s not normal thinking. Particularly if you spent 30 years in the restaurant business, which is filled with people who think the same thing but are still working in the restaurant business. Being on television, being recognizable, this is unnatural. So I chose to live in this world. I was in an equally if not more dysfunctional world before that, when I was a chef. Which is healthier, which is better for trying to maintain some kind of relationship with people who don’t do what you do? Is it possible? Can you be a good person? I’ll let you know when I figure it out.

Q: Is there something inherently writerly about being a cook or a chef?

A: I think there’s a great storytelling tradition in the restaurant business that tends to attract people with an oral tradition of bulls–ting and bollocking. Creative people, people for whom the 9-to-5 world is not attractive or impossible. It seems that way. There are a lot of stories in the business, and a lot of characters—and it seems to attract its share of artists and writers and people who hope to do something creative in their lives.

Q: Both fields have, perhaps, this kind of narcissism.

A: There’s no “kind of” about it—there’s something not normal about you if you’re writing a book about yourself, or about anything. And if you’re the kind of person who can deal with being recognized by strangers and if that’s tolerable or pleasing to you, and not immediately terrifying, that’s not normal either.

A: People in Gordon Ramsay’s generation, or Marco Pierre White—in the beginning, they had no expectations that they were going to end up on television. They learned to adapt to this new world. They didn’t go into the business to be on TV or write books or to get famous—they just wanted to be successful chefs. We now have a generation of people who in many cases feel that if they become chefs, they’ll get a TV show. They have a signature haircut, a year into the business, or a branding arrangement with a shoe company. I don’t really relate to that. I guess this is the world we live in now.

Q: It’s not a reflection of the reality of the job, which is grinding repetition.

A: By my way of thinking, if the high-water mark of your life is three episodes of Top Chef, you better have a Plan B. You can’t be milking that teat for the rest of your life—and some people do! They do these Top Chef cruises, they don’t have their own restaurants.

Q: There are a lot of fans who see you as this character, as this bad-boy figure.

A: But actually, with [first memoir] Kitchen Confidential, I was writing about a period of time that had already elapsed. When I wrote it, I was 43. I wasn’t snorting cocaine, I was pretty settled in my life. I knew that about myself, but the perceived me…I’m not complaining about it, it worked well for me that I didn’t feel any obligation to live that role. It was long dead to me anyway; I lived those years—they hadn’t turned out so good to me.

Q: But now there are those people who act in this way as a kind of archetype of you—which is ironic, because it’s not like Kitchen Confidential was necessarily you glamourizing your lifestyle.

A: Jen Agg at [Toronto restaurant] the Black Hoof wrote about this, about how Kitchen Confidential not intentionally, but probably, empowered a kind of meathead culture of cooks that felt like they’d be given permission to act out their worst impulses. Look, I’m not going to say I regret it. I acknowledge it. I’m a little embarrassed by it. But I think if you read the book carefully to start with, drugs didn’t work out too well for me. I’m of a generation that romanticizes and maybe even over-romanticized things that were painful, that hurt others. I feel that. But I don’t know if I have any regrets.

Q: Your CNN series Parts Unknown has been more political than your past series, but food still appears throughout as a focus. Is there something inherently political about food?

A: Very political—nothing’s more political. Who eats or doesn’t eat? What are we eating? What are they eating in Cuba? Is that working? If people are working only rice and beans for much of their diet, it says something. If people are eating mostly pickles after many generations, where did that come from? It’s reflective of history, often a painful history. It’s central to a culture, to a history, to a personal story. It’s communication at its most fundamental.

Q: When you do eat on these shows, something you frequently say is that it’s “magic,” or tastes “magical.” Is that still true, after decades of working with and writing about food?

A: Yeah. I think that’s what’s great about it—even if you’re hearing about it from a jaded son of a bitch, once in a while something happens on a pan or a plate that feels metaphysical.

Q: There’s a lot to be proud of, in Canada’s restaurant scene. But it’s not clear if we’re enjoying critical success—we have, for instance, no Michelin-starred restaurants.

A: You’re not missing anything. Who needs that kind of validation?! I think it’s meaningless. We’ve moved way beyond that.

Q: I was going to ask whether something was wrong with Canada’s restaurant scene if we didn’t have one.

A: No, no, no, I think you’re doing it right if Michelin hasn’t come. They’re utterly useless, and in no way prepared or capable of evaluating restaurants in a modern setting. How do you award stars? What’s the throughline of spectacular soup dumplings or a little tower of foie gras and truffles? No single organization is competent enough to put it all on the same scale. The world they live in now is in no way the world the Michelin system was set up to evaluate back in France, which was all about motorists and seeing if it was worth driving an extra 50 miles for a restaurant. It’s a silly thing. Why do you want to help a tire company? You don’t owe them nothing.

Q: Is there anything else you haven’t done that you want to do?

A: Yeah, I’d like to make a show with Keith Richards.

Q: A whole series or just an episode?

A: I think all I can hope for is a show. I’d love to play bass with Parliament Funkadelic, but I can’t play bass, so I don’t think that’s going to happen.

Q: You could always learn.

A: Little late for me.