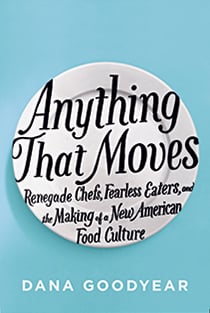 Anything That Moves: Renegade Chefs, Fearless Eaters and the Making of a New American Food Culture

Food culture, like pornography, seems to gets more extreme every year. It’s not enough to have foie gras anymore. You have to have foie gras poutine, as if the fatted liver of a goose isn’t quite fat enough unless it’s served atop French fries with cheese curds and duck gravy. For the last several years, Goodyear has been exploring the outer limits of that culture in the New Yorker, tracking everybody from raw-milk fanatics to insect evangelists. In her first book, she combines that reporting with new material to offer a chronicle of the food world that is equal parts engrossing and gross.

Anything That Moves is as much a linked series of cool stories as it is a work with a single theme. That isn’t a criticism. Many of those stories are really, really good. In the course of her reporting, Goodyear follows investigators searching for smuggled whale sashimi. She eyes, and sometimes eats, odd dish after odd dish, including frog fallopian tubes, scorpion tempura and a tasting menu made up entirely of raw beef. (Her attempts to go fully food gonzo herself, though, are stymied when she gets pregnant.)

This isn’t just a chronicle of gross-out meals, however. It’s a book about chefs and eaters and food fanatics of all forms who all want more: more extreme flavours, more exclusive meals, more ingredients no one else has. Goodyear wanders among them all with an equal mix of admiration and arched eyebrows.

Thankfully, she avoids any of the faux-macho posturing that infects so much food writing these days. (In other words, she sounds nothing like Anthony Bourdain.) Instead, her voice is funny and curious: “A relative of mine who lived in Buffalo and went by the name Shorty Plumb used to run booze across the border to Canada in the back of a pickup truck loaded with horse manure,” she opens one paragraph. “Truffle cheats follow the same rule of thumb: You hide the good stuff with the s–t.” Anything That Moves, suffice to say, is much more good stuff than the other.