What if Ariel Sharon had woken from the coma?

A review of 'Arik: The Life of Ariel Sharon' 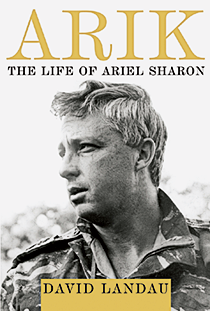 Arik: The Life of Ariel Sharon

It’s almost impossible to separate the life of Ariel Sharon from the history of Israel. When Israel was founded in 1948, Sharon was a paratrooper and went on to play major roles in the 1956 Suez War, the Six-Day War of 1967, the Yom Kippur War of 1973 and—infamously—Lebanon in 1982. Given the importance of defence in a tiny democracy surrounded by hostile Arab nations, it was natural for Arik Scheinerman—his name when his parents emigrated from Russia in 1922—to eventually enter politics. He became the 11th prime minister in 2001 but, five years later, fell into a stroke-induced permanent vegetative state at the age of 77. He died last week.

Landau, a Jerusalem-based Israel correspondent for The Economist, provides all-too-few personal glimpses of the twice-widowed Sharon. We learn of his need to get away to his massive (by Israel standards) ranch, his love of the symphony orchestra, his affection for his three sons and grandchildren, of his first wife, Margalit, and subsequent marriage to her younger sister, Lily. We get a sense of the brilliant but flawed character of Sharon the statesman, but hunger for more glimpses of the inner man; inevitably, most of the 600 pages cover his public life, hence Israel’s politics and perpetual state of war. (Sharon’s 1989 autobiography was titled Warrior.)

Landau focuses on the push to build settlements in the West Bank and Gaza between the 1970s and 1990s. He chronicles the dramatic reversal as Sharon orchestrated a unilateral disengagement from Gaza. (Unilateral, because his nemesis, Yasser Arafat, never seemed to negotiate in good faith.)

Landau deftly contrasts the five short years in power with the longer preceding years of Sharon’s military and political extremism. Readers are tantalized with what might have been, had Sharon awakened from the coma. The last chapter—“To sleep, too soon”—relates how “VIP syndrome” led to errors in his medical treatment, prematurely robbing Israel of perhaps the greatest military strategist it ever had.