Around the world in 33 artists: Book review 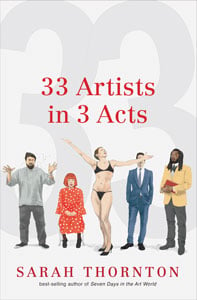 Of the many exquisite details that dot Sarah Thornton’s fascinating global tour of the lives, homes, studios and psyches of contemporary artists, few are as delicious as the revelation that the live larvae that were part of British artist Damien Hirst’s 2013 exhibit in Doha were transported business class on Quatar Airlines. The nugget, as telling of Thornton’s insider access to the grandiose modern art complex as of her storytelling skill, is shared in a scene that shows Saudi royalty mingling with Miuccia Prada, museum curators and model Naomi Campbell.

Thornton, a respected art journalist and author of the acclaimed Seven Days in the Art World, divides the book into three sections— “Politics,” “Kinship,” and “Craft”—comprised of three- to four-page “scenes,” each focusing on one artist. The format creates a rich, reverberating narrative, even if it can occasionally feel like dipping into a platter of first-rate hors d’oeuvres: great grazing but frustrating if you want to dig in. The structure works well juxtaposing art-world enfants terribles American Pop Art icon Jeff Koons, seen in his studio and out in public being adored, and Chinese dissident superstar Ai Weiwei, whom Thornton interviews at his home while he’s under house arrest. Thornton cleverly shows how both artists manage to be seen as socially audacious while beloved by the hedge-fund managers who collect their work.

Throughout, Thornton provides erudite context and trenchant asides while letting artists do the talking. Her recurrent question to her subjects—“What is an artist?”—proves that’s a query best left to critics: Cindy Sherman offers “a state of mind”; Zeng Fanzh’s definition is “a solitary philosopher.” What is clear, and seen most vividly, in scenes featuring art-world joker Maurizio Cattelan, is that theatrical skill and networking finesse are as essential as talent. Creating aesthetic pleasure is not part of the equation. When Brazilian painter Beatriz Milhazes suggests, “Human beings want something beautiful to live with,” it seems a radical concept.

33 Artists also reveals it’s impossible to avoid Lena Dunham; she pops up in coverage of Laurie Simmons and Carroll Dunham, the artists now most famous for being her parents. (It’s fair to include Simmons and Dunham, but when Lena and her sister, Grace, get “scenes,” it feels like a pander).

There’s always a price to access, and here it includes muted criticism of the artists’ work. That makes scenes of the few true provocateurs, such as the American performance artist Andrea Fraser, one of the few shown creating, bracing. Her work savages the modern art world; it’s a needed chaser.