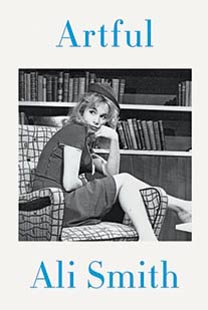 Ali Smith prefaces one of Artful’s four sections with a poem that opens: I placed a jar in Tennessee / because I could not stop for death / to see a world in a grain of sand / where Alph, the sacred river, ran. Is her mash-up of Stevens, Dickinson, Blake and Coleridge a postmodern pastiche, a modernist collection of fragments or simply a literary joke? In the context of this playfully elusive (and allusive) book, it’s likely all three.

Smith’s novels, such as The Accidental and There but for the, resist categorization, and Artful, which collects her Weidenfeld Lectures in comparative literature (“pretty much as delivered” last year at Oxford), reads as a novel disguised as a meditation on writing—but also the other way around. She discusses concepts such as time, form and marginal spaces within a story about an arborist whose dead partner, a writer, comes back to her—or him. Neither character is assigned a gender, and the revived writer, stinking of the grave and missing a nose, may or may not be real. The writer is determined to finish a series of lectures she/he was working on before dying, reproduced here within the framework of the story, along with a liberal sprinkling of quotes from fiction and poetry.

All of this may sound desperately confusing, but for the most part it isn’t. The book’s unorthodox framework lets Smith both state and demonstrate the multiple possibilities that literature offers. It can be a mirror, a lens, a flowering of imagination and an offering that breaks boundaries of time and space like the writer’s return to the arborist.

At times Smith wears her learning a little too lightly, flitting from one source to the next like an overstimulated magpie—one wishes she would give each quote more time to settle. But her book, unlike most lectures, is about stirring up ideas, not making pronouncements. As with the paintings reproduced at the book’s end (yes, there’s visual art here too), of trees with Oliver Twist in their trunks, Smith’s writing reveals how books can open up writers and their readers to the world.