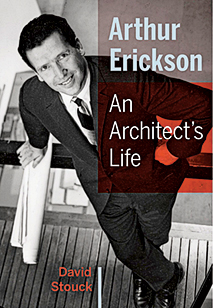 Arthur Erickson, that enigmatic, self-destructive genius, died in May 2009, just short of his 85th birthday, but in his hometown of Vancouver he lives forever. That’s the beauty of architects and their work. In a disposable world, they are as close to immortality as one gets. Walk down Robson Street and there’s his magnificent courthouse with a then-radical roof garden. There’s Simon Fraser University on Burnaby Mountain, which quite literally cemented his reputation: an inspiring tableau on sunny days; a huddled mass of cloud-wrapped concrete when the rains descend. Now, his last major creation rises on West Georgia Street, a graceful, twisting spire that will become the Trump International Hotel and Tower.

Stouck, a professor emeritus at SFU, offers a serious, sympathetic portrait of a walking contradiction. Erickson crafted grand, often controversial, monuments to his vision: Roy Thomson Hall in Toronto, the Canadian chancery in Washington and the University of Lethbridge, to name a few. Yet he returned to a Vancouver home so tiny it barely qualified as a cottage. In his early years, as he fretted about his sexuality, he was “drawn to the way of the monk,” Stouck writes, “undefiled by emotions or the physical necessities of the material world.” But as his star rose, he courted A-list acquaintances: Katharine Hepburn, Donald Sutherland, Rock Hudson, Prince Charles and Diana. He traded shamelessly on his close friendship with Pierre Trudeau. It helped neither man’s reputation when Trudeau overrode the bid process to award Erickson the commission for the Washington chancery. When Conservative MP John Crosbie likened Erickson to Albert Speer, Hitler’s architect, Trudeau threatened to settle the debate with fisticuffs.

Erickson’s name was his brand, but behind the scenes were, an employee said, “a hundred underlings who keep up the appearance that he does it all.” And hundreds more, including his extravagant long-time companion, Francisco Kripacz, to help Erickson spend himself into a massive hole with chaotic business dealings, lavish parties and constant travel. Although he would rise again, there was a poignant moment in 1992 when he filed for personal bankruptcy—in the very Vancouver courthouse he had designed.