A review of 'Athens' by James McGregor 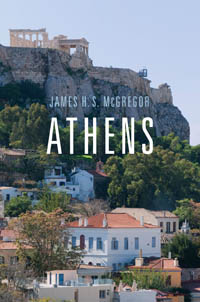 Athenians are well aware that the foreigners who throng their city every summer think its real history ended some 2,400 years ago. There have been moments of more global significance since, writes McGregor, an emeritus professor of comparative literature at the University of Georgia, but they only go to prove the larger point. When Lord Elgin stole the marbles from the Parthenon and brought them back to Britain in the early 19th century, he clearly thought he was dealing with the lesser children of mighty ancestors, and didn’t bother consulting the Athenians. But there is more to one of the most important cities in world history, McGregor argues in his erudite and amiable biography, than crumbling monuments to ancient glory—even if he himself devotes more than half of his book to the good old days.

There was an Athens, remote and mysterious, before the Battle of Marathon and democracy, that left its material traces and influenced the classical city in religious ways that secular moderns prefer to ignore. There were centuries of Roman and Byzantine domination. The governing language moved from Greek to Latin to Greek to French to Catalan to Italian before Turkish—and Islam—arrived in 1456. All of the outsiders left traces, sometimes of buildings, as often of destruction.

The more erudite pagan Roman emperors—and the more megalomaniac, like Nero—tried to put the stamp of their personalities on Athens. Byzantine Christians repurposed, as we’d say today, pagan temples into churches. The Orthodox Greek Christians built a church within the Parthenon; Roman Catholic occupiers painted murals of saints on its walls, the anti-iconic Greeks returned and whitewashed them; the Turks expelled the Greek archbishop (and every other Greek authority) from the Acropolis and adapted the church for use as a mosque, while adding a minaret to a corner of the Parthenon.

The Turks were finally expelled in 1830 by Greece’s war of independence, leaving the city to the tender mercies of the Athenians themselves. Their ongoing political struggles and the ravages of the Second World War took a toll, but less than the city’s explosive population growth—from 100,000 at the time of the ﬁrst modern Olympics in 1896 to 3.5 million now—and the Greek state’s endemic corruption and misgovernment. Athens is awash with ugly concrete apartment buildings, many of them, McGregor notes, with rebar sticking out of the concrete, the legacy of a law that taxed “unfinished” buildings more lightly than finished structures. All told, the history of the physical city is astonishing; a tale of death, resurrection and tenacious life that is more Homeric epic than Sophoclean tragedy.