Austerity: The History Of A Dangerous Idea 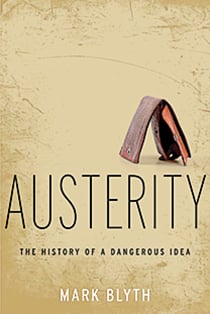 Canada has now been governed for some time by conservatives who allegedly care about deficits and debt, yet when the implosion of American banks dragged Canada into a recession, our government started spending far more, not less. Years later, we continue to spend into the red and our debt lurches ever higher. By contrast, even since the ascent of the Conservative Party in London, the U.K. has been biting a fiscal bullet. They have chosen to trim government spending in the hope of jump-starting future economic growth—in a word, austerity. According to Mark Blyth, this is a bad idea: “Austerity doesn’t work. Period.” Believing it only persists due to “epistemic arrogance and ideological insistence,” he sets out to trace the intellectual history of austerity, going back to its roots, from Adam Smith, David Hume and John Locke to more recent proponents like Joseph Schumpeter, Friedrich Hayek and current German leader Angela Merkel. Then Blyth gives us a decidedly discouraging historical tour of austerity in action, which among other things makes us feel sorry for Great Britain’s prospects.

Blyth, a professor at Brown University, is an unusually gifted communicator of complex economic ideas. But though he pens such colloquial sentences—“Iceland, in many ways, was Ireland on crack”—this book is most suitable for readers with at least an intermediate familiarity with macroeconomics. Blyth does not pause long to explain the importance of bond yields. Yet his book provides a rich background for understanding the policy options facing those who would solve the ongoing Euro-crisis. Blyth also revisits the momentous American decision to bail out its banks, which continues to prompt Republican murmurings about the necessity for belt-tightening. Insofar as the United States and Europe have a debt crisis, it is partly the result of a banking crisis. Bank bailouts created much of the debt that we hear so much hyperventilating about. As for puny Iceland, it chose to let its toxic banks go bust, and its economy is now doing rather well.

Blyth is too rigorous to be an ideologue. He thinks austerity measures have their place, but only under the right conditions. Now, apparently, is not such a time.