Our book review of 'I Died for Beauty' 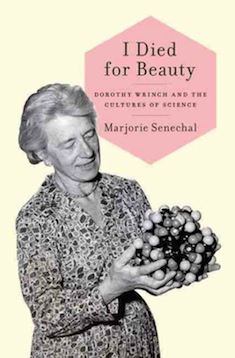 The book jacket dubs her an “ultimately tragic figure,” but in the 1930s, Dorothy (“Dot”) Wrinch was one of the hottest mathematicians alive. Scientists had just determined that proteins were molecules. But what did those molecules look like? Dot—the first woman to earn a science doctorate from Oxford, and the first female mathematician to lecture at Cambridge—had a theory: globular proteins were a kind of fabric or “lace.” The idea “set off a buried land mine.” Wrinch was a sensation.

As it turns out, she was also incorrect. Powerful microscopes have long since proved her theory wrong. And Wrinch has slipped quietly into the annals of fallen greats. In I Died for Beauty, she is resurrected by Senechal, her former pupil. Why was Wrinch forgotten when her contemporaries—many of whom also had error-studded careers—are revered and even Nobelled?

Senechal offers a detailed portrait of her pioneering mentor. In early chapters, we meet an unapologetically bright young brain who spends free evenings at Cambridge’s Heretics Society. Next, we see Dot through her intellectual prime. Those of a philosophic bent will delight in Wrinch’s thick-as-thieves friendship with famed logician and thinker du jour Bertrand Russell.

But the book’s second half is hard to bear. When Wrinch’s model proves wrong she is exiled from the halls of Oxbridge. In old age, she is partially vindicated (her structure was found, though not in protein), but remains ostracized. “First they said my structure could not exist in nature,” Wrinch explained. “Then when it was found in nature, they said it couldn’t be synthesized. Then when it was synthesized, they said it wasn’t important anyway.” Dot dies marginalized and alone.