Barbara Gowdy's mantra: ‘Just lie on your back and write’

Despite chronic pain, the author delivers another Gowdyesque novel, replete with absurdist humour 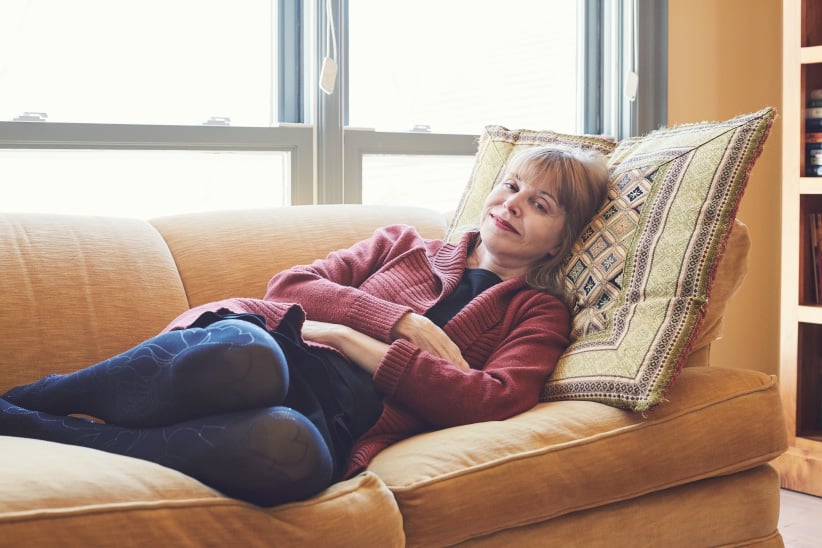 Barbara Gowdy in her home. (Photograph by Jaime Hogge)

If the past 10 years of Barbara Gowdy’s life were told as a stereotypical CanLit story, it would go something like this: a middle-aged writer, hurt by the commercial failure of her latest novel, retreats alone to her home at the edge of a park where, battling chronic back pain and then breast cancer, she struggles to write again, thinking back to her difficult coming of age in the 1950s and ’60s.

But as Gowdy herself tells it, the past decade has been a lot more like, well, a Barbara Gowdy novel. It involves a strangely undiagnosed condition, bewildering coincidences, a resistance to sentimentality and compelling, eccentric characters—first and foremost Gowdy herself.

“I’ve just always been pretty open about who I am and what’s happening with me,” says Gowdy. “In a way, I’m sort of dictating my autobiography as I go along.” These days, her pain makes sitting and standing unbearable, so she’s either in perpetual motion or lying down, whether to write or to submit to interviews that inevitably feel like therapy. Stretched out on the burnt-umber couch in the upstairs living room of her house in Toronto’s Cabbagetown neighbourhood, with a TENS device sending pulses into her back, Gowdy worries that knowledge of her situation might affect how her new novel, Little Sister, is received. “I hope that people don’t think of me as a victim.”

She’s attuned to the irony of how her predicament could in theory be a boon: “Gee, maybe I might win awards this time, ’cause ‘She’s the poor old, sick, cancer-ridden pain lady.’ ” But she speaks with a resilient verve. “I had a pretty great life until the pain hit,” she insists, “and I still have a great life.”

Gowdy rose to fame with her second novel, the darkly comic Falling Angels (1989), and in 1992 her short story collection We So Seldom Look on Love dropped like a bomb into the staid world of Canadian letters. Its protagonists include a man with two heads, a woman with four legs (and two vaginas), and a necrophile (later played by Molly Parker in the film adaptation Kissed). The book did attract some of the wrong kind of attention: “I had stalkers. I had to change my phone number a number of times—just guys who wanted weird sex. I kept my blinds shut for years.” And yet her collection never feels like a freak show: as she has done throughout her career, Gowdy deftly resists the sensational. “One nano false move,” says her long-time editor Patrick Crean, “and the whole thing would collapse. She was using these characters to present and explore moral considerations, speaking to something at the very core of all of our natures.”

Her subsequent books further mixed compassion with daring, most notably the international bestseller The White Bone (1999), which gets inside the heads of African elephants under threat by poachers. But Helpless (2007) went too far for many readers, depicting the kidnapping of a nine-year-old girl in part through the abductor’s point of view. It’s a work of great and disquieting emotional complexity that won Gowdy the Trillium Award, but she now calls it “a really big misreading of what people were prepared to investigate.” Shortly after Helpless was published, three-year-old Madeleine McCann was abducted from her family’s holiday apartment in Portugal. “The British reviews were, I feel, decidedly sullied. My book was read as if I were a defender of pedophiles.” Gowdy’s U.K. tour was cancelled. As it was, her pain was already making it hard for her to leave the house.

Until then, Gowdy had been a fixture on the Canadian literary scene—and a well-loved one. Beyond her oft-remarked-upon youthful looks, her childlike lack of guile makes the bluntness of her conversation somehow charming. Says her friend and fellow author Jane Urquhart, who met her in 1988, “I remember Barbara at various parties over the years, usually with a kind of silence around her after she said something that, had it not come from Barbara, might be [considered] outrageous.” She was also driven by a genuine curiosity about others. Poet and novelist Steven Heighton recalls meeting her at the 1993 Trillium Awards, after which she became a mentor to him: “Barbara really did want to connect with everyone, regardless of their ‘status.’ Awards dinners are clinics in advanced primatology. Barbara had come to us from a different ecosystem.”

It was at the ceremony for the 2003 Trillium Award (she was nominated for her novel The Romantic) that her pain first came on: “We had to stand in a room, as everything was said in English and French, for hours and hours; my back started to cramp really badly.” She ended up perched on a window ledge for relief, but the pain returned in the following days—and then months, and years. Gowdy wrote Helpless on her sofa in a semi-upright lounging position. By the time she started Little Sister, at age 56, in late 2006, she could type only on her back, when the agony abated, her output a mere 6,000 words per year.

Among scientists, specialists and healers, no one could diagnose her, let alone help. For 13 years, she says, she has tried every treatment—scientific and otherwise—recommended to her. “I’ve been seeing the guy who gets rid of everybody’s pain. I’m told, ‘If you don’t believe I can help you, I won’t be able to help you.’ I say, ‘I pray you can help me. I do, I do, I do believe in spooks’—but maybe I don’t believe enough.” Getting her “brain zapped” at the Centre for Addiction and Mental Health didn’t help, but drinking ayahuasca at Santo Daime ceremonies in Toronto did, somewhat: “It was really powerful as far as me coping with being in the world, being in pain.”

Her mother died of lung cancer in 2008, and in 2016, she herself was diagnosed with breast cancer. At least this time she knew what she was up against. She had a successful lumpectomy, and typical of her sometimes startling openness, she says, “Once I had the Band-Aid on—at [her friend] Marni Jackson’s launch, I was showing people: ‘What do you think? How does that look? It’s not so bad, is it?’ ‘No, it looks okay to me.’ Chris [Dewdney, Gowdy’s partner of 27 years] was appalled. I said, ‘I don’t think I have ownership of this breast. People I don’t know can stick needles in it and hack away at it.’ It was my way, I suppose, of accepting it.”

Strange family coincidences came into play. Gowdy’s younger sister, who drove her to the hospital for her biopsy, collapsed from an aneurysm in the waiting room, and survived because she was treated right away. Another sister, a year older, had developed back pain at the same time as Gowdy; it, too, continues to this day. “A part of me believes that I can’t get out of pain until she’s out of pain.”

Given Gowdy’s suffering, Little Sister’s premise sounds escapist. Rose, the owner of a repertory theatre in midtown Toronto, periodically finds herself psychically projected into the body of another woman—Harriet, a downtown literary editor whom she doesn’t know, but who reminds Rose strongly of her late sister. She can feel what Harriet feels, and see what she sees, and even though the editor is unhappy and unstable, Rose feels less plagued by her own problems as she piggybacks on Harriet’s daily life. Her experience is at first voyeuristic, but eventually it leads to a deep empathy.

Gowdy says she’s less interested in the idea of breaking away from one’s body than in the possibility of seeing oneself as if from outside, through another’s eyes. The book does obliquely draw from her life: one incident retells a cab ride she took during which the driver asked to be her gigolo: “I am looking for a woman. I would lift weights all day and come home and make love to her all night long.” (When she demurred, he gave her a business card—“For your friends.”)

More prominently, Rose’s mother is in the early stages of dementia, just as Gowdy’s mother was before she died. “While it broke my heart, I also knew everything’s material, and it’s so interesting to see where the damaged brain goes. It’s not unusual for old people, once they have dementia, to get coarse like little kids. My mother made me laugh out loud.”

Gowdy’s darkest writing is often leavened by humour: she has an undiminished appreciation for the absurdity of human behaviour, and for the fresh perspectives of children. Some of the book’s most affecting passages are flashbacks to when Rose and Harriet were girls. Gowdy figures she has herself retained some of the unfiltered perspective of her childhood years: “I’m learning rather late not to blurt too much out, although I don’t care who I offend. I care who I hurt, and I think there’s a big difference.”

Gowdy fantasizes about being more of a bull in CanLit’s china shop: “No one wants to talk about being envious, especially Canadian writers. ‘We all love each other.’ I’ve been nominated for the Giller twice. If I’m ever nominated again and I don’t win, I’m thinking of pounding the table and saying, ‘F–k! F–k!’ Because that’s what everyone’s thinking.”

The literary landscape changed significantly over the time she was writing the book, and Gowdy returns to it bemused, as would a recently awakened coma patient. She’s appalled by overbearing political correctness: “I’m glad I didn’t write We So Seldom Look on Love now, and I don’t like the stifling of any thought or art.” She waxes sarcastic about how professional book-reviewing culture has given way to random enthusiasts on Goodreads, and as for Canada Reads and its panels of famous names, she asks, “If there were an architectural competition, would I be chosen to be on the panel simply because I live in a house?”

She’ll soon be taking her unfiltered perspective across Canada: her cancer is in remission, and although the back pain is bad enough that it has started entering her dreams, she plans to brave a book tour for Little Sister. She may have to lie down when signing books: “I don’t care if people are laughing and think it’s stupid.”

Being an artist, she says, is increasingly a thankless task, and yet she has no desire to stop. “I can work. It’s the one thing I can do. It’s almost as if the universe is saying, ‘Don’t do anything else. Just lie on your back and write.’ ”