Book review: Beyond Belief: My Secret Life Inside Scientology and My Harrowing Escape 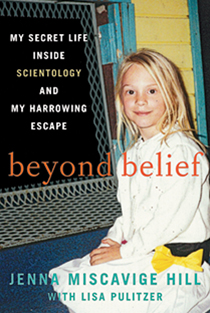 Is this the book that will bring down Scientology? Its power lies partly in the author’s name: Jenna is the niece of David Miscavige, who has been the leader of Scientology since L. Ron Hubbard died in 1986. The rest of the book’s power comes from Jenna’s shocking story of childhood endangerment, parental abandonment and institutional indoctrination.

Born in 1984, Jenna was a third-generation Scientologist. Her parents soon decided to leave their life in New Hampshire and dedicate themselves to the church. They joined an organization of committed Scientologists called the Sea Org in California. That’s when the family unravelled and Jenna was sent to a remote labour camp for kids called the Ranch in Riverside County. Small children were expected to renovate the property, making rock walls, digging trenches and dragging roofing materials. Everyone was supposed to run, not walk, while putting in 35 hours of work a week. Jenna’s broken knee was ignored. The kids’ education, called “Chinese School,” was based on parroting back dogma. Evenings were filled with mandatory staring contests and something called “bull baiting” that supposedly taught emotional control. Children were encouraged to snitch on each other, handing out demerit points with harsh punishments. Meanwhile, Jenna’s parents—like most couples—were kept apart while they rose inside the executive offices of the church.

Life as a teenager inside the Sea Org started to bristle. Jenna began acting out against the public beratings and mind-control tactics and finally left. (Her parents had already quit the organization by that point.)

So will this exposé shake the foundation of Scientology? Nobody in the Sea Org will get to read it, but other Scientologists will be hard-pressed to ignore its content. Certain celebrities should want to distance themselves.