A review of Susan Cheever's biography of e.e. cummings 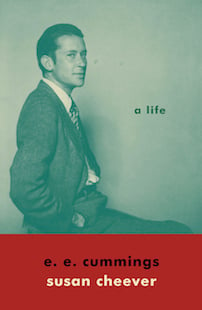 Edward Estlin Cummings’s first word was apparently “hurrah”—fitting for a poet who had so much joie de vivre. His playfulness and satiric bent cut through the prevailing perception of modernism as elitist and wilfully abstruse. And if, as Cheever notes in her epilogue, his literary star has dimmed over the past 20 years, then this biography might help restore some of its lustre.

Cheever, a novelist and memoirist (and the daughter of Cummings’s friend, novelist John Cheever), was in the right demographic to appreciate him the first time around. She opens her book with a recollection of seeing him read at her high school in 1960, when he was in his mid-’60s but still “an unabashed and very funny rebel” and she, “a miserable 17-year-old junior with failing grades.” The writer of “i sing of Olaf glad and big” was no fan of institutions, and he comes across as a lovable if flawed man full of ideals and contradictions. He was a Harvard graduate who disdained intellectual snobbery, a man with aristocratic tastes who eked out a bohemian existence in Greenwich Village, and a romantic idealist who could be childish and petty, too.

Cheever portrays an interesting man living in interesting times. Incarcerated in France during the First World War for insubordination by the American army, he was skeptical of Uncle Sam, but, after being spied on during a trip to Russia in the ’30s, he berated the Communist project that captivated many of his artist friends. He had passionate, erratic relationships with three wives, the first of which nearly ended in disaster as he repeatedly brandished a gun when she took a lover, threatening to shoot the two of them and himself.

The descriptions of his milieus and colleagues are vivid, but his poetry gets short shrift. Although Cheever details its controversies (including raciness and accusations of anti-Semitism), in general, she quotes at length but glosses little. When she does, she’s not quite reliable (one offbeat poem she presents is assuredly not in “conventional iambic pentameter”) and, indeed, more focus on his boundary-breaking verse would round out her portrayal of a man who poured so much of his life into his art.

Unlike previous Cummings biographies, this is a resolutely middlebrow book, but its intimacy and slender size appeal. Cummings’s poems never wore out their welcome, and this is a fittingly svelte introduction to the man who preferred the lower-case “i.”