When Paul Seesequasis started posting archival images on social media to shine a light on the resilience of Indigenous communities, thousands of people responded 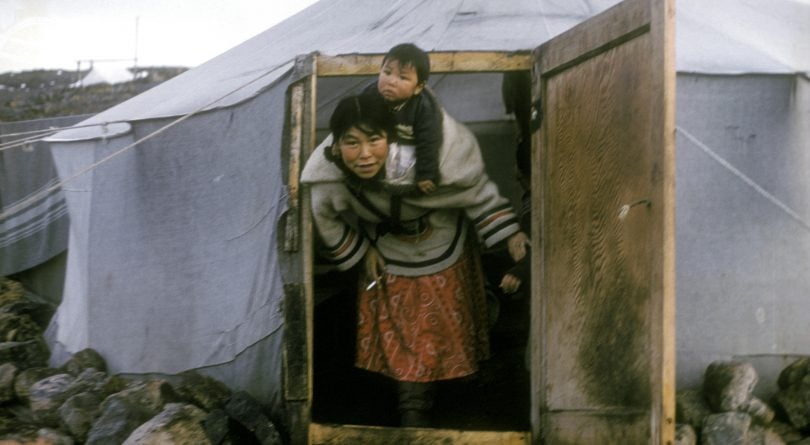 This photo, taken in Cape Dorset in 1960 by photographer Rosemary Eaton, is of celebrated Inuit artist, Kenojuak Ashevak in her youth, leaving her home and artist’s studio with her son on her back. The hamlet was home to a burgeoning community of Inuit artists who would go on to make waves across Canada. Ashevak, who died in 2018 at the age of 85, was a rising star when this photograph was taken. August 24-Oct 3, 1960 [September 29, 1960], 35 mm colour slide. (Rosemary Gilliat Eaton Fond/e010835916/Library and Archives Canada)

Paul Seesequasis’s new book, Blanket Toss Under Midnight Sun, curates archival images with the intention to reframe the Indigenous experience in eight communities (seven in Canada and one in the U.S.) Seesequasis, a Willow Cree writer, journalist and activist who lives in Saskatchewan, wanted to show that amidst the suffering inflicted by the residential school system, life was going on in these communities, and love, laughter, art and culture were continuing to flourish.

Seesequasis speaks about the origins of the book, the experience of writing it, and what he hopes readers will take away from it. Interspersed among his answers are photos from the Cape Dorset chapter of Blanket Toss.

Q: This book has its roots in a social media project. How did that project start for you?

A: Well, the project was looking back at the resilience of Indigenous communities over 50 years. I was interested in doing it because my mother and most of my aunties and uncles are survivors of residential schools and at the time I started the project [in 2015] the Truth and Reconciliation thing was going on. My mom had made a comment [that while there were] a lot of horrible times and hard times through those years, there was also a strength within the families and a connectedness. If it wasn’t for that, our languages and cultures would not have survived this. So I was curious about that, and I started to explore online, thinking visually, mostly through photographs. I started off knowing very little and as the project gradually built, my knowledge increased and I became more familiar with the archives and museums and historical societies and some of the actual photographers.

I began to be able to access photos that had been digitized; [some] were later on sent to me by individual photographers. I posted those online on social media across several platforms, Facebook, Twitter, Instagram, etc. [And] in many cases, [the people in] these photos weren’t identified, and what began to happen was people would say, “That’s my auntie, that’s my uncle, that’s me 30 years ago,” and people began this process of naming the photos. And it’s kind of opened up this nice dynamic between the people who are in the image and the narrative that comes out of that. In many ways, that was the genesis of what was to become Blanket Toss Under Midnight Sun.

Q: Were you surprised at the reaction to the photos that you posted?

A: Initially, yes, I was taken aback by the interest. The followings on social media increased to the thousands and people began to really relate to the photos. Even if they weren’t photos from their community, people found them of interest. I think there are two levels to it. One is the issue of visual reclamation, where communities become familiar with photos that have existed in archives or museums or historical societies, and kind of reclaimed them as a strength or a connection to their ancestors.

And the other [level] is from the outside, people who aren’t Indigenous or aren’t from those communities. Hopefully the photos present a different framing of the Indigenous reality throughout those decades—people laughing, people joking—that they don’t normally [see] of Indigenous communities.

Q: Why did you choose these eight communities to feature in the book?

A: That’s a good question. I wanted to try and get a breadth geographically. Obviously you can’t cover every part of the country. So I decided to focus on eight [communities] and the regions, and knowing [that] in those regions, there was enough of a thread to the story of those photos, that I could either interview the people in the photos or find the resources to be able to construct a narrative that would do justice to the image and the place [and the] time and who was in that photo. 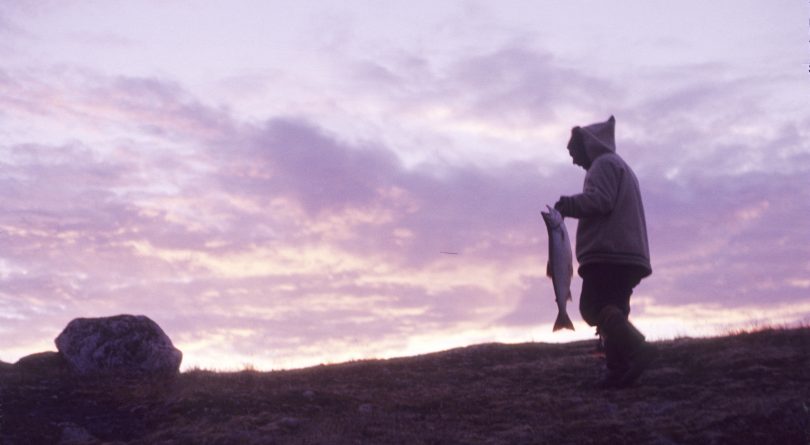 Q: What do you hope will change as a result of the project?

A: Well, I hope a couple of things happen. One is that the communities have a relationship to the photos. We just finished an exhibition in Calgary where some of the photos [taken] by a photographer [named] Arnold Lupson in Treaty 7 territory are on exhibit right now, but hopefully they will get back to a community. And so [the community will] have possession of the actual prints of those photos. Because it’s one thing to see something online. It’s another thing to have the actual photo on the wall, something that you actually see and is physical.

I also hope the book is something that people will read and learn from and get a picture of the diversity of the communities that are featured [and] get a sense of what Indigenous life is [like] in different regions of the country and the way people lived over the past 50, 60 years. 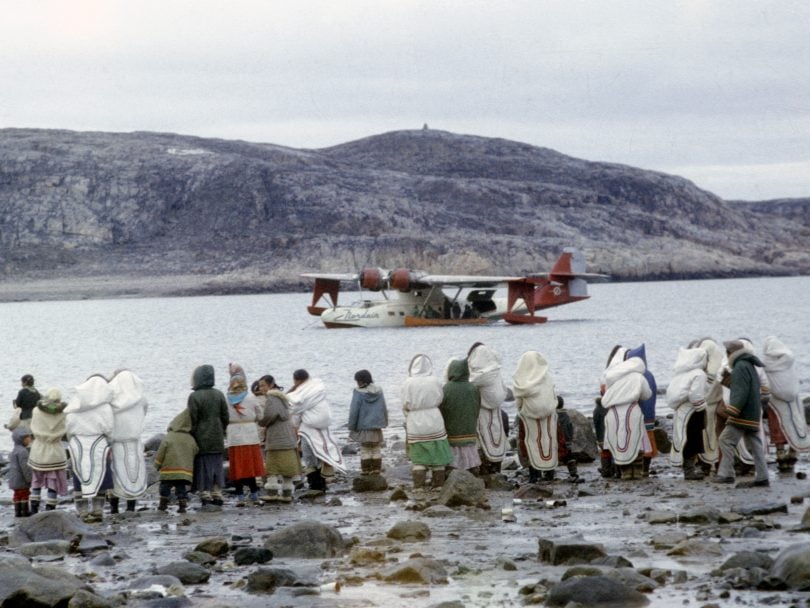 Q: I noticed that there was emphasis on describing what people were wearing and the origin stories of their clothing. It was very informative that way.

A: Yeah, it was. And a lot of these photos were taken during times of transition. The Cape Dorset, [Nunavut] photos were mostly taken by Rosemary Eaton, a photojournalist who happened to be up there in 1960 just as Kenojuak [Ashevak] and other artists who had gone to fame were getting started. So timing was an important factor. It was also a factor in the writing of the book itself. A couple of the photographers I interviewed for the book were in their 90s when I interviewed them [one to two years ago] and they’re no longer with us. I was able to interview them while they were still here and their memories were sharp, and they were able to open the doorway to narratives of people in those photos that would have been lost otherwise. 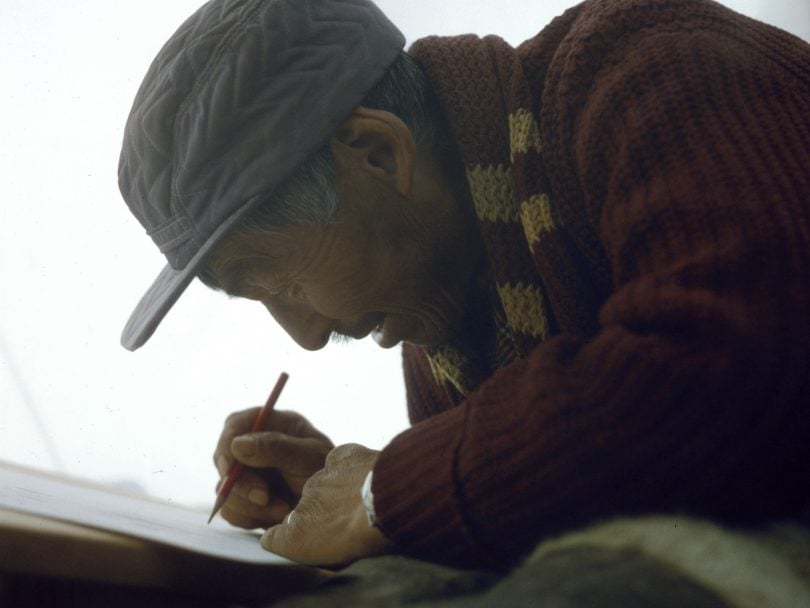 Q: Why was it important for you to have a chapter on Cape Dorset?

A: I think Cape Dorset is a special place. I think that moment in time, the burgeoning of the artists’ co-operative [West Baffin Co-operative] up in Cape Dorset, the fact that you had this core of Inuit artists who came together, Kenojuak [and] other artists as well, the dozen of them that went on to prominence. It was a tremendous opportunity to show the amount of creativity and talent within what is a small community of people. It’s a remarkable place and they were remarkable artists.

It’s also a reflection of how [the photographers] are creative as well, you know, as they’re not professionally trained. They’ve left us a legacy. The fact that there happened to be a lens framing those people in their ascendency as world-famous artists, to me, was just a golden opportunity. 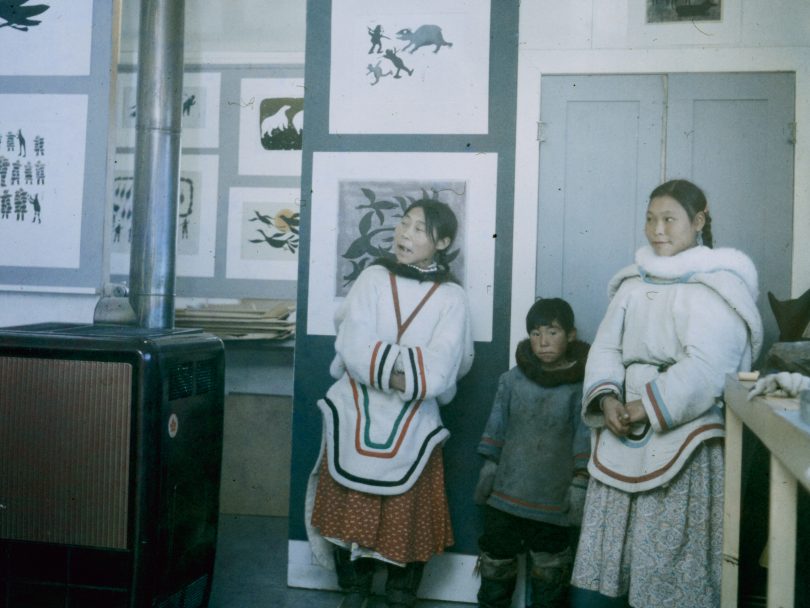 Q: About the photo of Kenojuak Ashevak, a famous artist from Cape Dorset, you wrote “she is light emerging into the day.” Why did you want to include this particular photo in your book??

A: [Kenojuak] was just an amazing artist. She had her own distinct style. I think all the artists up there at that time, not all of them lived as long as Kenojuak did, so they perhaps didn’t receive the level of recognition that she achieved in her lifetime. But she was a remarkable woman with a remarkable gift. She was an excellent print maker, and she had an eye for art from her culture. She translated it through her hand into her own expression that is so unique, so immortal, and [that’s] why it’s so respected today.

[In this photo] she’s coming out of the canvas tent, I believe, after doing work within the tent, because there’s other photos that Rosemary took of her actually drawing. So, I think those were all taken on the same day. I think, as a metaphor, she’s emerging from her place of creativity into light and she’s also emerging, at that stage, onto the world stage. So, I think the photo, in that way, is very prophetic.

Q: And her son, Adamie Ashevak, the one who’s in her hood, also became an artist, right?

A: Yes. There’s a lot of talented people in that family and many of the families up there. 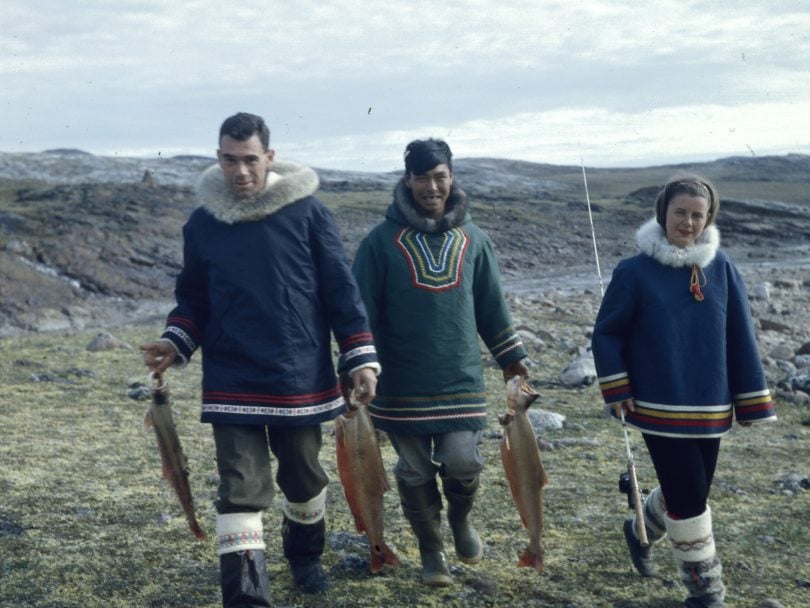 Q: What made the photographer who snapped this shot, Rosemary Eaton, different from the other “outsider” photographers trying to document life in these communities?

A: Rosemary Eaton—her maiden name is Gilliat—was an outsider, she came from England and was in Toronto in the ’50s. It’s an assumption, but I think she quickly [thought] Toronto was a pretty staid place at that time, she probably got bored of it very quickly, and she [was] very curious about the expanse of the country. And so she began to work as a photojournalist, trying to sell her photos to magazines and newspapers.

She went with a couple of her co-workers across the country on road trips and she happened to also take an interest in Indigenous people. But her photos were not beads and feathers and people in regalia, for the greater part. They were just people in their communities. And I think probably also because she was a woman, her interest was [in] women working in the kitchen, or women working outside, or women with children. Her eye was, I think, quite different than, say, a male photographer at that time likely would have been. So I think it was her sensitivity toward women and toward children, I think, which resonates within her photography and has made it lasting. 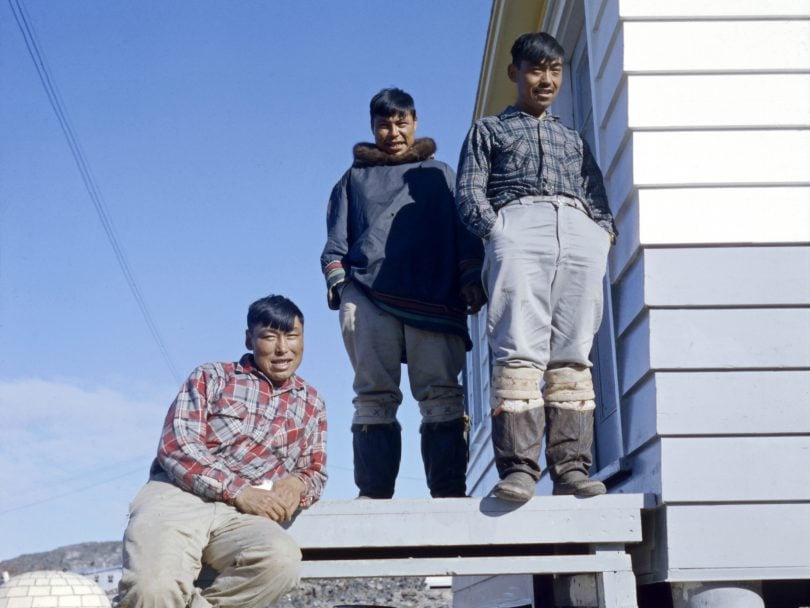 Q: And how long did it take for you to complete the book and its research?

A: The book itself, I would say, was start to finish, a year and a half to almost two years. A lot of that was trying to arrange interviews. In a lot of cases, you had to do your interviews at a particular time of year because people are in their hunting season or people are all on the land in the summer. So actually setting up interviews [required] patience. You just have to wait a few weeks, a month, and maybe you start to give up [thinking] that person’s not going to get back to you, and then a month and a half later, you get a phone call.

It’s not the type of book you can rush. Everyone had to have a sense of patience and just go with the flow.