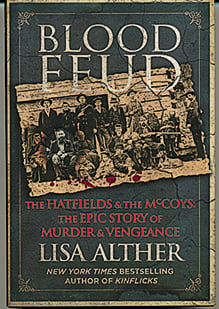 In American history there are few examples more stark of the carnage that a toxic brew of guns, alcohol, exaggerated notions of personal honour and profound stupidity can wreak than the infamous 19th-century Hatfield-McCoy feud. Alther, a bestselling novelist with a distant connection to the McCoy side, tells the entire mind-numbing story. Simmering anger over the murder of a Union McCoy soldier by a Confederate Hatfield in 1865 exploded in 1878 after the McCoys accused a Hatfield of stealing a hog. His acquittal set off a cycle of violent retribution that killed more than a dozen before it ended in 1890. But two factors in Alther’s book raise it above a tabloid retelling, one being the historical context she provides.

The war between Hatfields and McCoys became universally known because its Civil War resonance and the legal issues it raised—the U.S. Supreme Court had to decide whether it was legal for a posse from Kentucky (home of the McCoys) to seize a group of Hatfields from their West Virginia homes—led to a wildly popular book. It in turn inspired 92 silent films about rampaging hillbilly killers, entrenching the feud in American pop culture. (Star Trek’s irascible Dr. McCoy traces his ancestry to one side.)

There were other Appalachian feuds, though, all rooted in the same “Corsican” culture—as the big-city press put it at the time —of personal honour and subsistence farming. One, between the Baker and White families, lasted 95 years, from 1806 to 1901, and involved the murder of the governor-elect of Kentucky in 1900, not to mention somewhere between 100 and 150 others. In a mere three years (1884 to 1887) the Martin-Tolliver feud killed 20 and wounded 16.

The other striking aspect of Blood Feud is subtler, dispiriting, and never explicitly put forward by Alther, but emerges clearly from her exposition of events: the practical value of unhesitating violence. It was the born killers, the ones unhampered by moral qualms or a belief in the legal system, who showed the highest survival rates.