Book review: Blood Sisters: The Women Behind The Wars Of The Roses 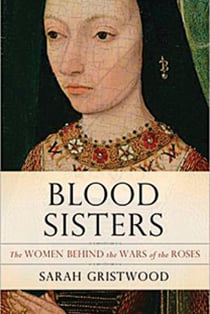 Fifteenth-century England was a time of constant upheaval: royal cousins fought cousins while brothers plotted to overthrow siblings. In this real-life game of thrones, the only certainty was that fortunes could and did change overnight. Two months after Cecily Neville’s Yorkist husband, son and brother were killed by Lancastrian forces, her eldest son was crowned Edward IV. Twenty-five years later, her granddaughter would marry Henry VII, the man who killed another of her children, King Richard III, at Bosworth. While most historians focus on the men of the Plantagenet dynasty who tore their families and nation apart during the Wars of the Roses, Gristwood weaves a dizzying array of Yorkists and Lancastrians into an engaging and coherent history by focusing on seven women, including Cecily Neville, who played crucial roles in the bloody feuds known as the “cousins’ war.” While the women were the family conciliators, they were also ruthless. “The business of their lives was power,” Gristwood writes, “their sons and husbands the currency.”

The backbone of the book is Margaret Beaufort, a Lancastrian heiress and future matriarch to the Tudor dynasty. She married four times, the first time when she was just 6, but usually the minute she was out of mourning for the previous husband. Each was the most politically advantageous prospect available. The most important nuptial was in 1455 when she wed Henry VI’s half-brother, Edmund Tudor. She was 12, he was 24. The following year she was a widow giving birth to the future Henry VII.

As her prospects ebbed and flowed, Margaret Beaufort never lost sight of her primary goal: protecting her only child until he could claim the throne. For much of that time mother and son were apart. In 1471 he fled to France with the Tudors and Lancastrians after a failed uprising. He didn’t return until 1485, when his forces overthrew Richard III. It was the Tudors who ended the cousins’ war by remorselessly stamping out any Yorkist threats. Still the bloody family fights continued. In 1513 Henry VII’s son-in-law, King James IV of Scotland, invaded England. He died at Flodden Field fighting England’s army.