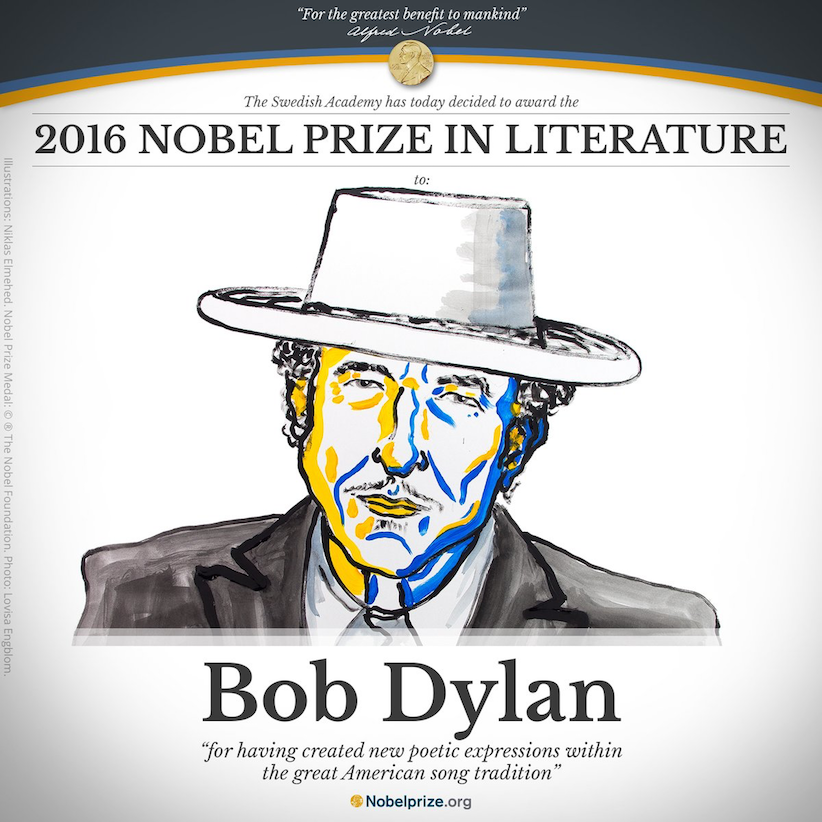 STOCKHOLM — Singer-songwriter Bob Dylan won the 2016 Nobel Prize in literature on Thursday, a stunning announcement that for the first time bestowed the prestigious award on a musician for “having created new poetic expressions within the great American song tradition.”

Reporters and others who gathered at the Swedish Academy’s headquarters in Stockholm’s Old Town reacted with a loud cheer as his name was read out.

Dylan, 75, is arguably the most iconic poet-musician of his generation. Songs such as “Blowin’ in the Wind” and “The Times They Are A-Changin”’ became anthems for the U.S. anti-war and civil rights movements of the 1960s.

Dylan’s impact on popular culture was immense and his influence as a lyricist extends to every major music figure and songwriter of the last 50 years, from the Beatles to Bruce Springsteen and beyond.

But although he had been mentioned in Nobel speculation for years, many experts had ruled him out, thinking the academy wouldn’t extend its more than a century-old award to the world of music.

They were wrong. The academy’s permanent secretary, Sara Danius, said while Dylan performs his poetry in the form of songs, that’s no different from the ancient Greeks, whose works were often performed to music.

“Bob Dylan writes poetry for the ear,” she said. “But it’s perfectly fine to read his works as poetry.”

Dylan is the first American winner of the Nobel literature prize since Toni Morrison won in 1993.

Danius told The Associated Press that a “great majority” on the 18-member Nobel panel voted for Dylan. She said her personal favourites among Dylan’s songs include “Chimes of Freedom” and “Visions of Johanna.”

Lyrics from scores of Dylan songs, such as “Blowin’ in the Wind,” ”Stuck Inside of Mobile With the Memphis Blues Again,“ ”My Back Pages“ and ”It’s Alright Ma (I’m Only Bleeding),“ have worked their way into the public lexicon over the years, becoming repeated over and over, much in the manner of lines from Shakespearean plays.

Born on May 24, 1941, in Duluth, Minnesota, Dylan grew up in a Jewish middle-class family.

By his early 20s, he had taken the folk music world by storm. From that time on, he would constantly reinvent himself — often enraging followers in the process — but then later winning them back and adding new admirers. His career was such a complicated pastiche of elusive, ever-changing styles that it took six actors to portray him in the 2007 movie based on his life, “I’m Not There.”

Although generally described as a rock musician, Dylan has been influenced by numerous musical styles, including country, gospel, blues, folk, pop, and rhythm and blues. Pursuing them all, sometimes separately and other times simultaneously, he remains a towering influence over music and popular culture.

He won an Academy Award in 2001 for the song “Things Have Changed” and received a lifetime achievement award from the Academy of Recording Arts and Sciences in 1991. In 2008, he was awarded a Pulitzer Prize for his contributions to music and American culture.

Dylan is the most unorthodox Nobel literature prize winner since 1997, when the award went to Italian playwright Dario Fo, whose works some say also need to be performed to be fully appreciated. By a sad coincidence, Fo died Thursday at age 90.

The literature award was the last of this year’s Nobel Prizes to be announced. The six awards will be handed out on Dec. 10, the anniversary of prize founder Alfred Nobel’s death in 1896.

Announcement of the 2016 #NobelPrize in Literature https://t.co/VXayV4bvhC