In short stories, most only a few pages long, Peacock recounts the life of the alphabet. 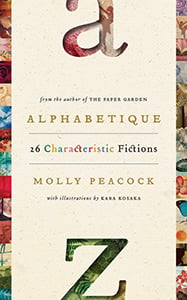 In 1969, Georges Perec published La disparition, a novel written without the letter e. The book (brought into English in a herculean feat of translation—still sans e—as A Void) was a product of the French literary group Oulipo, whose members declared that creative freedom came not from the absence of formal constraints but from the endless invention of new ones. The nature of the constraints was arbitrary; Perec could as easily have omitted the letter m as the letter e. The point was only to turn art into a problem to be solved.

Alphabetique inherits a formal legacy that bridges La disparition and children’s abecedaries. In 26 short stories, most only a few pages long, Peacock recounts the life of the alphabet. The letters are no different from any other fictional characters, except that their longings and crises are typically shaped by literal or figurative associations, and their narratives favour alliteration. As in some of her early poetry, Peacock finds great freedom within form, bringing a lush, poetic diction to stories that shift easily from whimsy to, at times, real poignancy.

What the characters of Alphabetique have in common is the theme of discovery, of becoming and maturation: D is divided between two identities—between female and male, between the curve and the vertical line. C struggles all his life to express himself, at last realizing his silence is more eloquent than words. The book assembles a collection of miniature Bildungsromanen ﬁtted to the alphabetic motif, which chimes nicely with its themes—the alphabet is the starting point of education, letters the beginning of words.

Formal constraint create both coherence and clumsiness. Sometimes, the alphabetic premise hampers these stories. But, at its best, it ascends into a joyous exuberance: “Jiggle was a jack-in-the-box, a one-girl jamboree. Jiggle was all beginning—she was January. She was all bloom. She was June, she was July.” Often Peacock approaches elements of human experience that aren’t easily alphabetized: “I need you even now,” L thinks of her deceased mother, not an l in sight. In these moments, constraint functions as the Oulipians intended as a scaffolding that falls away from the more enduring edifice of deeply felt truth.

Peacock’s sensual prose is beautifully paired with illustrator Kara Kosaka’s collages, which provide vivid portraits of the 26 letters. This infinitely giftable edition travels from arbitrary alliteration to zealous zaniness, offering glimpses of the myriad lives contained in between.