Breeders once favoured long noses like those of the great dane; bulldogs are now cherished for their exaggerated wrinkles 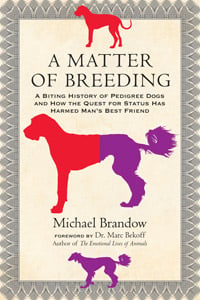 A MATTER OF BREEDING: A BITING HISTORY OF PEDIGREE DOGS

As a professional dogsitter in New York City, Brandow has an undeniable love for man’s best friend. But he sees a problem with the commercial rise of purebreds on city sidewalks—one that can’t readily be dispensed with using a plastic bag. Take Bob, a five-month-old bulldog so riddled with health problems he can barely waddle from his Manhattan apartment to the elevator without needing to stop and vomit. Historically a tough-as-nails breed, bulldogs today are sought after, and the more exaggerated the wrinkles in their skin the better—though this can lead to infections and unnatural body proportions that make moving around a serious endeavour. Female bulldogs, it turns out, aren’t particularly interested in mating, but the insatiable appetite for little bulldogs means they are nevertheless encouraged—that’s putting it mildly—to mate. They were once restrained in “rape racks” for breeding, a method still in use today, writes Brandow.

In this book he tells the stories of the various breeds he takes on walks, giving the reader a history of pedigree dogs as he goes. It’s not just bulldogs that get the short end of the leash. A chow chow’s diamond-shaped eyes are beautiful—and prone to surgery for a condition where the eyelids turn inwards. And pugs are bred to have such flat faces, never mind the breathing difficulties it can cause. But they sure are cute, right?

Cataloguing canines, Brandow demonstrates, was a pastime of the wealthy, who in essence became gatekeepers of the doggy characteristics that would be sought after—long noses, short tails—regardless of the dog’s well-being. Of course, nowhere is the obsession with preserving a dog’s bloodline deeper than in the high-stakes world of dog pageantry.

Dogs have been a part of our pop culture for generations, in legends like Lassie and pop culture tropes like that talking chihuahua from the Taco Bell commercials. They can embody heroism, loyalty and humour. But behind many of those iconic images is a tragic tale. The statuesque pose of Rin Tin Tin can be awe-inspiring, if only it weren’t for the reality that German shepherds now often live with crippling hind-leg issues. There is one simple way, of course, for a prospective dog owner to end the cruelty to dogs and return a longstanding companion’s compassion and loyalty: buy a mixed breed or, heaven forbid, a mutt.