A vet’s ode to Newfoundland: review 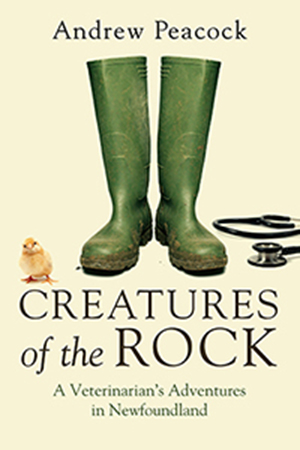 CREATURES OF THE ROCK: A VETERINARIAN’S ADVENTURES IN NEWFOUNDLAND

The harbour town of Carbonear, Nfld., is one of the oldest European settlements in North America, home to nearly 5,000 residents including a transplanted veterinarian, Andrew Peacock. Fresh out of school, he moved from Guelph, Ont., to the picturesque Avalon Peninsula in 1982 with his new wife, Ingrid, a doctor, for what was to be a short posting. Instead they fell in love with a dilapidated house and settled in to raise a family. As the only vet for some 200 km, he was the go-to expert for every animal emergency ranging from a cow that “looked like someone had inflated her with a bicycle pump” to a hallucinating lynx. Now he’s collected the tales of a three-decades-long career into an affectionate ode to his adopted home.

Since 1970, when Alf Wight, under the pen name James Herriot, began his enormously successful All Creatures Great and Small series, based on his veterinary adventures in Yorkshire, others have tried to emulate his folksy, self-deprecating style. Peacock succeeds. His humorous anecdotes flow with an effortlessness that marks a true storyteller. Some stories are de rigeur coming from anyone who’s cared for large animals, including two livestock castrations, which, in Peacock’s hands, are downright hilarious. Then there are experiences that are quintessentially Newfoundland: performing the first EKG on a humpback whale in the frigid North Atlantic and helping a stranded polar bear get much-needed dental surgery.

What sticks in the memory long after are the small details: his thinking behind the pants he wore to his interview for veterinary school, or his trying to fill his truck with gas while keeping calm an orphaned young moose, curled up in the passenger foot well. “Some weird lookin’ dog you got there, buddy,” says a fellow customer. There’s also handy advice in case the unexpected occurs. After all, who knew that polar bear sightings are only taken seriously when the animal’s fur is described as being yellow, not white?