Book review: Family matters in 'The Truth About Luck' 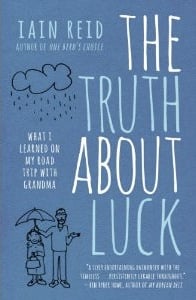 Iain Reid continues to mine familial matters with humour and candour in his second book (read our review of his first, here.) At a loss for what to get his simpatico grandma—who loves the Ottawa Senators, gardening and playing golf—on the occasion of her 92nd birthday, he reasons that time together is the most meaningful thing he can offer. So he whisks Grandma away from her home in Ottawa to his apartment in Kingston for a “staycation.”

For five days, over breakfasts of toast and jam, dinners out at restaurants and record-listening sessions in Reid’s bedroom, the equally good-humoured pair get to know each other outside of their kindred mantle. They share recipes (“Iain’s special dressing”) and stories, like the author’s laugh-out-loud recounting of his first sleepover at the age of 6 where he explains to friends that wearing a “big boy” diaper is as normal as his Care Bear pyjamas.

Over the course of their domesticated escapades, Reid can’t help but wonder whether his grandmother, being in the dusk of life, ponders the end of it. Instead, she remembers the most poignant parts: immigrating to Canada from Scotland as a child, being stationed as a nurse in England and Sicily during the Second World War, returning to Winnipeg and meeting a handsome man named George, whom she would marry, and outlive.

Reid realizes that the memories that become most vivid in life’s third act may be unexpected ones: take the beautifully recounted Proustian moment about the only piece of cheese his grandma ate in a tiny restaurant in Rome during the war: “I’ve never had another bite like it,” she says. And the author becomes aware that he’s smack dab in the middle of constructing his own: after a dinner, the pair pause in Reid’s driveway at night. Together, they strain to see starlight through the clouds and smell the earth after a heavy rainfall. Reid can’t remember the last time he stood outside his place. But “it’s mighty pleasant.”