Book review: Laughing All the Way to the Mosque

Zarqa Nawaz, the creator of 'Little Mosque on the Prairie', chronicles her misadventures inside her community 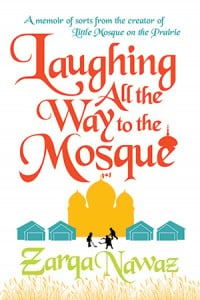 LAUGHING ALL THE WAY TO THE MOSQUE

You know author Zarqa Nawaz. She’s the lovable kook who created Little Mosque on the Prairie, the hit Canadian television show that ran for six seasons. When it debuted on the CBC in 2007, the show upset some members of the Muslim community who accused her of making fun of Islam. Well, they’re not going to like this book, either. It chronicles Nawaz’s own misadventures inside her community. With a light touch and great humour, she pokes fun at Muslims and her Punjabi-Canadian clan. The anecdotes create a wry portrait of an immigrant daughter struggling against tradition, sexism and the shalwar kameez.

Arriving in Brampton, Ont., from Liverpool, England, with her family at the age of five, Nawaz hates wearing brown cords under her sundresses. By the time she’s a tween, all she wants to do is shave her legs and snip off her Amish braids. The rebellion seems standard, but then Nawaz does something completely unexpected. She reclaims the hijab to lord it over her parents and hector them with her righteousness. What follows is a funny collection of stories about summer camp, Chicken McNuggets, career ambitions (“[My father] believed marriage was for women who failed to get into medical school”) and her early days at journalism school. In what must be a first, a Canadian writer describes the allure of Ryerson University as “a glittery, forbidden disco ball.”

Nawaz’s two brothers cannot marry before their sister, so she agrees to meet some Punjabi suitors. Her mother lines up young men, and Nawaz marries. She has kids, becomes a filmmaker, builds a home and visits Mecca. There are some silly escapades involving circumcision and ghosts in an outhouse, but Nawaz makes up for it by telling us exactly what happened inside her Regina mosque when her TV show aired and when a visiting imam from Saudi Arabia tried to impose female segregation at the mosque. “Most Muslims agree that the problem, as usual, is Saudi Arabia,” she states plainly.

Like every good Canadian memoir, it ends with a story about meeting Stuart McLean and, in an act of love, she gives her mom the last laugh.

FILED UNDER: book reviews Laughing All the Way to the Mosque Little Mosque on the Prairie Zarqa Nawaz