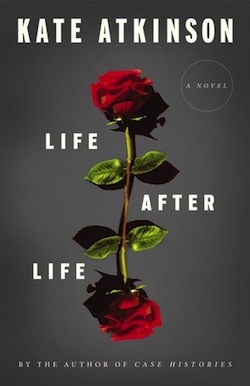 The what-ifs of life can torture you, if you let them. But what if you could press the restart button as many times as you’d like? Kate Atkinson, the British writer best known for her BBC-adapted series about a P.I. named Jackson Brodie, runs us through the possibility in her latest novel.

Ursula Todd is born in 1910 and then dies moments after. Turn the page and she’s born and lives (the doctor makes it through the snowstorm this time). She makes it to her fifth summer, but drowns on a seaside holiday. Then she doesn’t drown, but falls from a window chasing after a doll. Put that way, it sounds trite, but it isn’t. (Though Atkinson herself plunges head first into time-travel cliché in her opening pages, with a gun pointed at Hitler’s heart.) As a powerful dread nudges Ursula away from harm, her life fills out into longer and longer chapters. Ursula at secretarial college, Ursula as an abused wife, Ursula miserable and alone during the London Blitz, Ursula, friend of Eva Braun. The one constant in Ursula’s life, however, is her increasingly cranky mother; some people just can’t be changed.

With each do-over, we can’t help but entertain the hope that this set of choices will lead to Ursula getting things exactly right, and wonder what that “exactly right” will look like. In a lesser writer’s hands, a novel that revisits its main character’s birth 12 times would likely be tiresome, but each revision is fresh, often funny, and filled with new life in more ways than one. Atkinson tackles a mystical theme in Life After Life, but she is at heart a realist. Though there’s some mystery at play in Ursula’s life, she experiences her triumphs and regrets like the rest of us (perhaps with a slight bit more Britishness): hoping for the best but preparing for the worst, while having a good laugh at it all when you can. What more can life teach us, really, even when you only get one?