July offers readers an impressive character study of an unlikely protagonist who eventually finds her way, writes our reviewer. 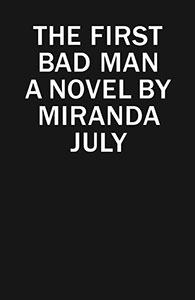 In her films—Me and You and Everyone We Know and 2011’s The Future—and her short-story collection No One Belongs Here More Than You, the actor and writer Miranda July has made a successful multi-platform career of exploring the bizarre moments in everyday life. Her much-anticipated debut novel, The First Bad Man, follows suit by focusing on Cheryl Glickman, a single woman in her mid-40s whose life centres on maintaining equanimity and control. She is stymied, however, by the uncomfortable sensations caused by her globus hystericus—the proverbial lump in one’s throat that she’s experienced for “30 or 40 years.” Cheryl’s emotions well up and get stuck—she cannot cry.

July’s unusual protagonist has worked at a woman’s self-defence studio for more than 20 years, but her overwhelming quality appears to be naïveté. What Cheryl’s reality lacks, though, she makes up for with a very rich fantasy life. She imagines relationships with an older male board member (with whom she thinks she’s been involved in previous lifetimes) and with a man who takes care of her garden (she wrongly assumes he’s homeless) and with many babies and children whom she collectively calls Kubelko Bondy (souls she considers “not mine biologically . . . just familiar”). It is in these curious exchanges that the reader begins to understand that Cheryl’s life is built on a complex set of perceptions and beliefs, which begin to unravel when her ordered world is threatened by an unwanted houseguest, her bosses’ 20-year-old daughter, Clee. Their relationship plays with boundaries: First, they are adversaries, then Cheryl takes on a mothering role and, later, they become romantic partners, after Clee gives birth to a baby boy, Jack.

In typical July fashion, characters defy societal convention and their strangeness gets scripted as, well, regular. This book covers a lot of ground: It is about bodies, desire, touch, sex and kinship. But it is the sheer physical existence of Jack—and of mothering—that ultimately anchors Cheryl in reality. Cheryl realizes she’s changed: “My old self was being moulded, slowly but with a steady force, into a new shape: a mother. It hurt.” July’s writing is clever and insightful and her book offers readers an impressive character study of an unlikely protagonist who eventually finds her way.