A harrowing journey from Madhya Pradesh to Tasmania and back again

Book review of A Long Way Home, by Saroo Brierley 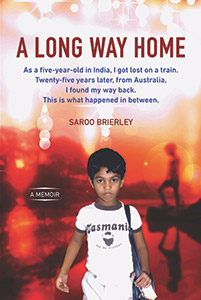 The photograph on the cover of this book was taken in 1987, when the author was six years old. He had just landed in Melbourne and was walking into the room where he would meet his new parents. You can see the resolve in his gait, and the wariness in his eyes. If you look closely, you can see a piece of chocolate in his hand—a precious piece of chocolate, given how malnourished he was and also how afraid, despite his brave face.

The moment marked the end of a harrowing journey, one that had begun some six months earlier aboard a train bound for Calcutta from the central Indian state of Madhya Pradesh. Brierley had boarded it accidentally at a rural outpost while waiting for his older brother, and wound up travelling more than 1,500 km away from his family. Alone in one of the world’s biggest cities, his language was so limited that he was unable to identify his home village or even his last name. He lived for weeks on the streets, begging and scavenging; he hopped on several trains departing from Calcutta, hoping one might take him back to his family. Eventually he landed in an orphanage where an adoption agency matched him with a couple in Tasmania. By then, Brierley had accepted that he would never see his mother again. He flew thousands more kilometres away from her, bonded quickly with Sue and John Brierley and thrived in his new home.

But he never gave up hope of returning to his first one. In college, students who’d grown up in India helped him piece together bits of memory with their guesses about what part of the country he was from. Brierley embarked on an exhaustive Google Earth search, studying every route out of Calcutta, searching for a water tower near a pedestrian overpass close to a train station. That he finally found his family isn’t even the most remarkable part of his story. It’s the quality of their reunion that truly inspires.